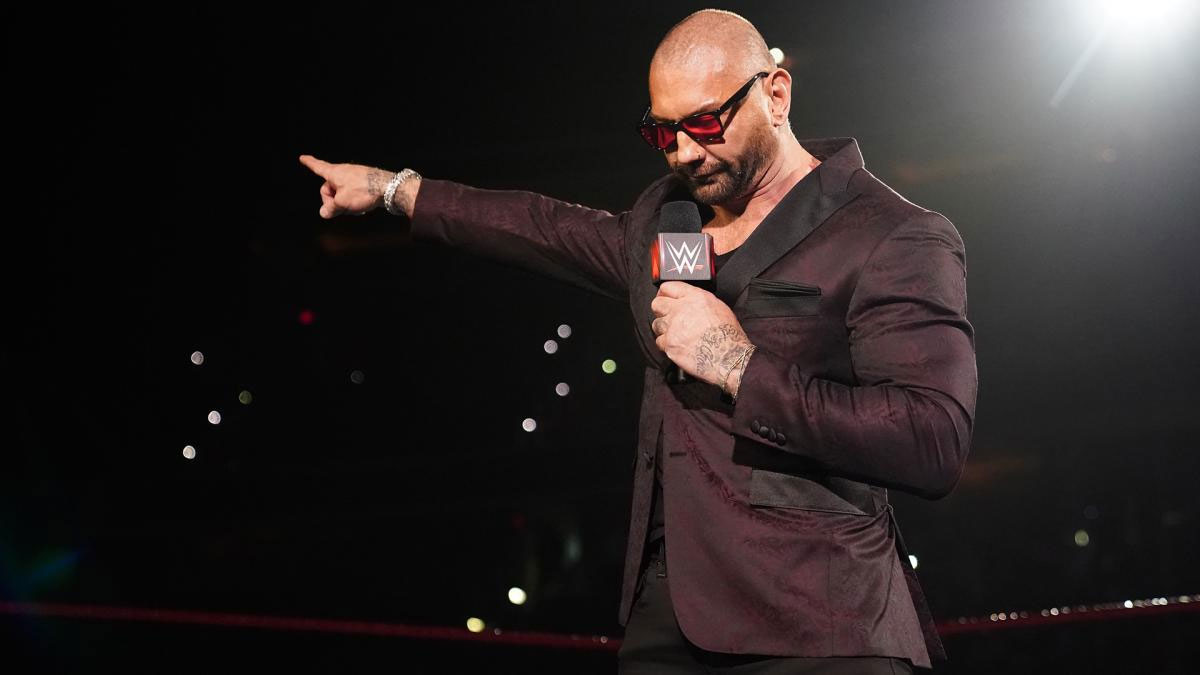 – The WWE RAW show begins with Stephanie McMahon coming to the stage. Stephanie says she can not believe there are six days left before WrestleMania. The Triple Threat Match will be even bigger as she will add a fourth participant! April Fools! … Stephanie says that more seriously for the first time the women will be at the main event of WrestleMania.

The real breaking news is that all titles will be in play at WrestleMania! Only one woman will bring all the titles home. Three of the best athletes will give their best in the ring because at WrestleMania the winner will take everything! Stephanie goes backstage.

– Brock Lesnar’s music begins and Universal Brock champion Lesnar arrives with Paul Heyman in the ring. Heyman introduces himself and presents the champion Universal Lesnar, who will be it again next Monday when he will say it. Heyman says that the phrase that the winner takes is all poetic. At WrestleMania, the winner will take on Sunday. This Sunday Brock Lesnar the winner will take everything Seth Rollins can offer, Lesnar will take all the best shots Rollins and Lesnar will take everything Rollins has in his life.

Rollins says it’s the biggest fight of his life this Sunday, but also that of Lesnar. After WrestleMania, everything will change for Lesnar. Lesnar can not ask what he wants here and it ends. Nobody wants to see Lesnar here. Rollins does not want to see him here, the Superstars do not want to see him here and the fans either. Rollins says he knows that Lesnar does not care about how much money he makes, he is so strong and the most decorated athlete of combat sports. Rollins says that beating him at WrestleMania is not impossible.

Sunday he will beat Lesnar, take his title and Lesnar cannot do anything. Lesnar was leaving the ring pushing him, but Rollins kicked him under the belt! Lesnar pushes him away and gives him a German Suplex. Lesnar takes it for an F5, but Rollins makes it a low blow. Rollins chained with his Stomp to ring him, poses with the title Universal and leaves the ring.

– Back after the break, backstage, Charly told Seth Rollins that if he acts the same way he will be disqualified Sunday and will not be Sunday. Rollins says he is not yet the champion.

At the end of the fight, Phoenix makes his Glam Slam on Royce for the account of three.

– In the parking lot, Batista arrives!

– Back, Dave Batista arrives in the ring and the lights close on him. Batista points to the screen and we see a video of his former rivalry against Triple H at WrestleMania 21. Batista tells Triple H to go fuck himself. Batista drops the microphone and goes backstage.

– Back, we find Elias in front of MetLife Stadium. Elias says he will give his best performance with no one to cut him. He already hears people singing “walk with Elias”. Following on Sunday no one is going to talk about Rousey, Kofi or Rollins. People will talk about him while 80,000 people will decide to walk with him.

The participants of Andre The Giant Royal Battle are ringside.

At the end of the fight, Crews made his Frog Splash on Mahal for the count of three.

– After the fight, Crews poses in front of the André Le Géant trophy, but the other wrestlers also arrive to pose. The fight breaks out in the ring and Crews is the last man to stay in the ring!

– Back, it is mentioned that Yolanda Adams will sing the American anthem at WrestleMania 35 .

– Kurt Angle arrives in the ring and the crowd sings thanks to him. Angle says it’s his last night at RAW. He enjoyed the good and bad times. From the bottom of his heart, thank you. A video about Kurt Angle’s career is presented. Angle shed tears and Baron Corbin’s music begins. Corbin says he does not know who made this video, but it should have been in black and white.

The man in this video is no longer the man in the ring. The man on the ring has trouble removing his jacket or standing up. The fact is that Kurt Angle cannot cope with newer Superstars who are stronger and better, especially him. Corbin says that it’s also enough to hear that Kurt Angle deserves a better opponent for his last fight. The crowd sings “John Cena”. Corbin says that we must forget the man we saw in the video. The last picture we will have is a broken old man on his back at WrestleMania.

Angle says the two will fight at WrestleMania, but why not do an exhibition fight tonight? Corbin approaches the ring, but leaves. Corbin says it’s the intensity of old Kurt Angle, but his intelligence is no longer there. He will wait at WrestleMania to beat him tonight.

Rey Mysterio arrives in the ring and says he and Corbin can compete to show a lesson in respect. Corbin seems to want to refuse and hits Rey! Rey and Angle take control, Angle the fate of the ring with Angle Slam. Angle says the two will fight at WrestleMania, but why not do an exhibition fight tonight? Corbin approaches the ring, but leaves. Corbin says it’s the intensity of old Kurt Angle, but his intelligence is no longer there. He will wait at WrestleMania to beat him tonight.

– Behind the scenes, Charly is with Charlotte Flair to have her comments on the new stipulation. Charlotte says she’s going to break Becky’s leg and get Rousey banged. Stephanie had to change the stipulation because she changes the game again. The person who will take everything is her. Charly asks if tonight Charlotte could be the first to lose control. Charlotte says she is a professional during the fight, but after the fight, Rousey and Becky would be better off staying away if they want to participate in WrestleMania.

– Ricochet and Black arrive in the ring.

Ricochet and Aleister Black vs. The Revival (Scott Dawson and Dash Wilder) (c)

At the end of the fight, Ricochet jumps on Dawson and Wilder down the ring. Wilder goes back to the ring. Ricochet also wants to go up, but Dawson was hidden under the ring and holds his leg to prevent him from climbing, the referee counts ten.

Winners: The Revival via count out

– After the fight, Wilder celebrated at the bottom of the ring, but Black surprises him with his Black Mass! Black gets into the ring and also makes his Black Mass in Dawson and Ricochet goes on with his 630 Splash.

– Behind the scenes, Ronda Rousey is warming up. Charly arrives to ask him a question, but Rousey says he does not have time. Whatever the stipulation, it will be the day of judgment for Charlotte and Becky at WrestleMania.

– Back, we present a video of the rivalry of Braun Strowman against the American animators Michael Che and Colin Jost. Behind the scenes, Tyler Breeze, EC3 and Alexa Bliss talk together. Bliss says she’s doing a great job. Finally women in the event, Kofi will have a fight and Jost and Che will fight. Breeze says they are fashion. EC3 starts to laugh. Braun Strowman arrives and asks why they are laughing. Breeze points off saying that the guys’ empties further away were funny. Strowman goes to see the two men and tells them to come in the ring and they will represent Michael Che and Colin Jost.

– Behind the scenes, Roman Reigns is asked for his comments on the fact that he would not be 100% ready. Reigns asks who is making his rumors. Drew McIntyre does not know anything about his health. He is 100% released. Drew McIntyre arrives and hits him in the back! McIntyre chases the shots on Reigns and officials arrive to stop him.

– Back, behind the scenes, Becky Lynch says Sunday she will come out of MetLife as the first RAW and SmackDown champion. It’s not important what Charlotte said. For Rousey, she has already won against her months ago. Rousey feels untouchable and that’s where it’s easier to defeat her.

At the end of the fight, Rousey applies his Arm Bar to Morgan to get her hit.

– After the fight, the clash broke out between Charlotte, Becky and Ronda while the tension was at its strongest. Security guards arrive, but they are all ringing. The police arrive and stop Becky and Ronda who do not want to stop fighting. While Rousey is handcuffed, Charlotte takes the opportunity to hit Rousey! The police also arrest Charlotte.

– In the parking lot, the wrestlers are shipped, with a lot of resistance, in police cars.

During the fight, Lacey Evans walks on the stage and returns behind the scenes.

At the end of the fight, Heavy Machinery make their Compactor on Gable on behalf of three.

– Back, the fight begins.

The fight begins and Strowman tells his opponents that they represent Michael Che and Colin Jost. At the end of the fight, Strowman made a Double powerSlam to his opponents on behalf of three.

– Lashley and Rush arrive in the ring. Back, Charly asks Bobby Lashley for his comments for Sunday. Lio Rush says that last Monday was a stroke of luck for Finn Balor. Their only concern for Sunday is where will be the party after the . Charly asks if they are worried about the return of the demon. Lashley says he is not afraid of the fairy tale. The demon is Finn Balor and he has always dominated Balor, Finn Balor is on the TitanTron and says he has always had demons and at WrestleMania, his demons will be Lashley’s nightmare. Balor turns into a demon on the screen.

– Back, we confirm that the demon Finn Balor will face Lashley at WrestleMania 35.

At the end of the fight, Rey made his 619 to Corbin and climbed on the corner. Rey starts Splash, but Corbin avoids it. Corbin chained with his Deep Six and covered him for the victory.

– After the fight, Corbin celebrates his victory on the stage, but Kurt Angle arrives and pushes him to the ground. Angle binds with its Angle Lock! The referees arrive to stop Angle. The show ends with a celebration of Angle.