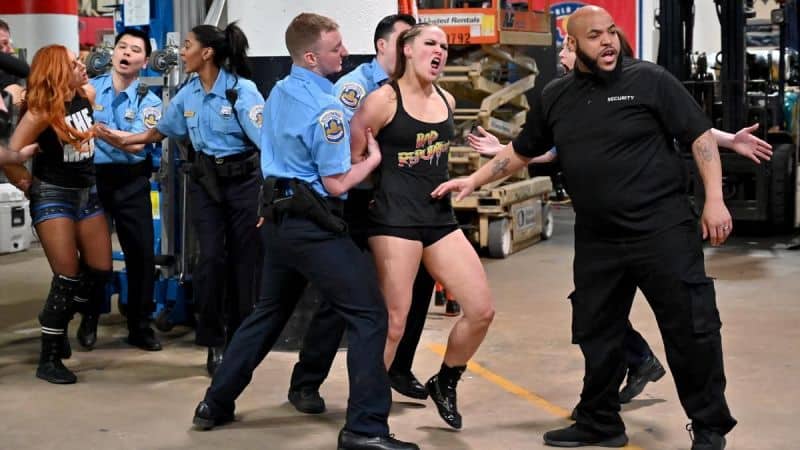 The main event at WrestleMania 35 will be a match between Ronda Rousey, Becky Lynch Charlotte Flair. Just a few days before the show, there was a tremendous scramble between the three racers in the Last Raw episode. It has come so far that all the three racers were arrested by police by handcuffs. Although WWE has now informed that Ronda Rousey, Becky Lynch Charlotte Flair have been released from police custody, but they have to appear before the court in court.

In fact, the Tag Team match of the division of the Women’s Division was booked for Raw, in which Rite Squad’s Live Morgan, Sarah Logan Ruby Raitt face Ronda Rousey, Becky Lynch and Charlotte Flair. There should be no dispute between the three WrestleMania opponents in the match, so the condition was that those who tried to attack her partner during betraying or match her, she would be evicted from the main event of WrestleMania.

The three wrestlers in the match have won this keeping in mind the condition. When the match ended, Ronda Rousey attacked, and then the case got out of hand. WWE security guards arrived to rescue between Ronda, Becky Charlotte, but they failed to stop them. After this, the police also came there, but the three continued to attack each other. Ronda, Becky, Charlotte were taken in the arena by handcuffs and inside the arena.

Must Read: WrestleMania 35: The two women’s titles at stake in the main event

Charlotte, Becky Lynch Ronda Rousseau do not leave the attack despite being handcuffed. After a big embarrassment, the police detained the three. According to the information found, all three have been released, but they will have to appear in court for the hearing. At present, the date of
hearing has not been revealed in court.