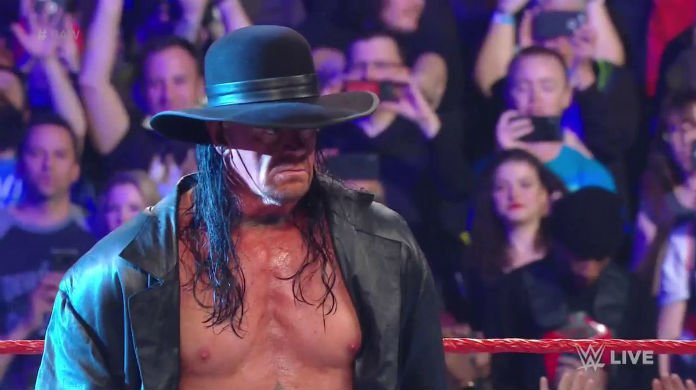 We did not see the Undertaker at WrestleMania this year, but the Deadman was certainly not going to be absent from this big WWE weekend.

Bret Hart had already posted a photo on Instagram a few hours before RAW showing the presence of the Undertaker backstage at the Barclay Center in Brooklyn or is taking place this Monday night’s show. It only remained to be seen if he would participate in the show or if he had just come to greet friends.

It was during the musical performance of Elias that he appeared. Elias who challenged anyone to come and interrupt him and said that whoever dared was “a dead man”. “A dead man” to be precise, which meant what you thought.

The Undertaker then makes his entrance to join Elias in the ring, who think at first go not to look for problems. But he finally makes a U-turn to confront the Deadman. After a little battle of looks, Elias pretends to leave again, but turns quickly and attacks.

Even at age 54, we do not do it at the Deadman. This one brings him a big boot to put him down and chained with a chokeslam and a Tombstone Piledriver.

We do not know if this is a return for involvement in RAW or a simple overnight pass for the Undertaker, but Elias will have to pay attention to his words next time, at the risk of invoking other legends.