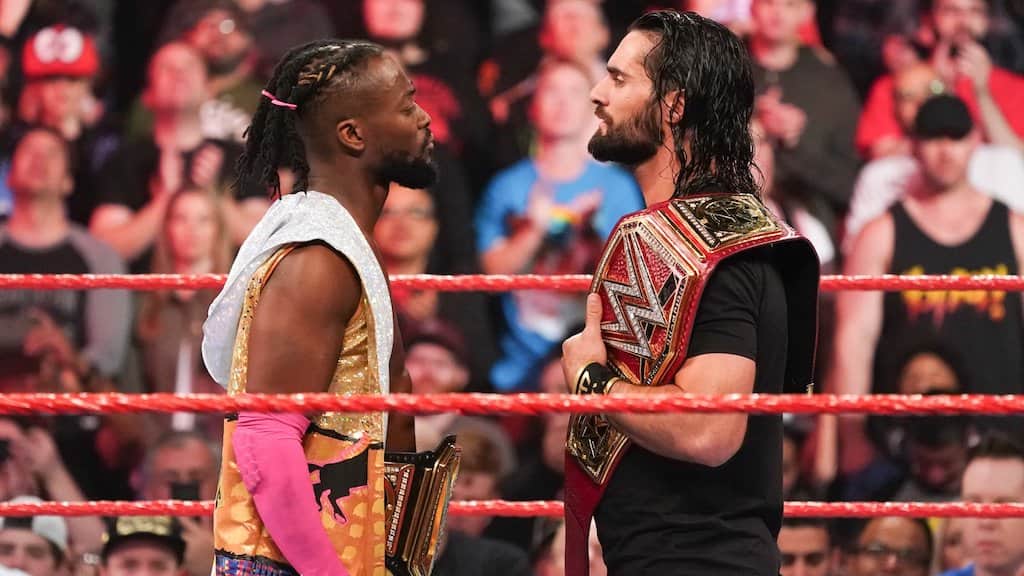 WrestleMania 35 has passed but the atmosphere of the biggest wrestling weekend of the year has not yet fallen. This Monday night is Monday Night RAW, an episode almost as important as the big show where a lot can happen in three hours.

We start with your new WWE Champion Seth Rollins who is greeted with a huge cheer that will not surprise anyone in the aftermath of WrestleMania 35. It’s a formal celebration that opens this episode, with a Rollins saying that disassembled as if a truck had passed him but he is delighted with what he did to Lesnar, and to have recovered the title, getting a song “Full-time field” well placed.

He is interrupted by the other man who became champion last night, Kofi Kingston. The New Day could not wait until tomorrow to be able to celebrate and we understand them. But Kingston, thinking back to the main event of this Sunday night had an idea to propose to Rollins: a champion match against champion, “Winner take all”.

It is obvious that neither will win the match, it only remains to guess who will intervene in the match to prevent the titles to change hands.

The rematch clause no longer exists, but the Revival still have the right to a rematch to try to recover RAW team championship titles.

Zack Ryder and Curt Hawkins defeated The Revival to keep their titles.

Amazing, we were already ready to call Zack Ryder “The 24h champion”.

When Corbin leaves the ring, the first notes of a theme song that we never thought we heard at RAW sounded. Lars Sullivan makes his entry and heads to the ring and after a few eye exams, attacks Angle with the Freak Accident and a diving headbutt.

Lars Sullivan is finally here. It’s not going to work out for Braun Strowman who was in the position of Monday Night RAW’s Big Man and had been struggling for some time now. We do not know if Corbin and Sullivan are going to be involved in one way or another, but Corbin would certainly be a good manager.

Alexa Bliss beat Bayley by falling with a DDT in less than three minutes. Glad to see Alexa Bliss in the ring, but obviously Bayley and Sasha Banks are back in the box of the losers.

THE MAN VS THE LADY

Becky Lynch enters with her two RAW and SmackDown belts to celebrate her win yesterday, recalling that after months of “Ronnie and Ric’s daughter” bringing her back, it’s the one “who has arrived without anything went away with everything “.

She goes on to say that she will look forward to Ronda Rousey’s return to slap her, while for Charlotte Flair, “the McMahons will give her the titles of team champions” to console her for her loss. We can say after a promo like this that this is a way to close this chapter and to start a new one.

The next chapter will begin to write. While she explains that she expects a challenge from both brands, Lacey Evans arrives and this time it’s not fair. Becky Lynch approaches to greet him, Lacey Evans hits her.

The Man against The Lady. It’s quite simple and it has enough to offer a transition challenge for Becky Lynch time to install his reign in the meantime of the most serious.

Aleister Black and Ricochet team up again. It might be time to let them perform solo now. The Superstar Shake up next week should perhaps help. Meanwhile, they face Bobby Roode and Chad Gable who in a small vignette explains that they will now “do things their way”. In general, it’s the ready-made phrase when a Superstar or a team is at the end of the race and the WWE does not have much for them.

Aleister Black and Ricochet beat Bobby Roode and Chad Gable by falling with a Codebreaker of Ricochet on Gable.

Not super efficient their way to Gable and Roode, obviously.

Elias complains of being interrupted by John Cena and his rap at WrestleMania but wants to reassure everyone: tonight he will have plenty of time to perform and challenges anyone to interrupt him. You can add a new NXT call up here.

Dean Ambrose arrives for his very last WWE match in which he will face Bobby Lashley who tells him before the game that once he’s gone, he’ll take care of his wife, enough to annoy him so the match did not take place and for the two wrestlers to fight outside the ring until the table of commentators through which Lashley passes Ambrose.

Dean Ambrose is leaving, but Sami Zayn is back, and that’s good news. By cons Mojo Rawley is not better and always speaks in a mirror he broke after drawing on the face. Help this man.

No chance. Sami Zayn takes the microphone to pretend to be a friend with the public for a few moments before sending him back to work and make him go to hell. We love you Sami too.

It’s Elias’s turn to join the ring for the performance he promised us. He really does not want to see anyone coming to interrupt him tonight. He even announces that the one who will come to interrupt him is a dead man, a “dead man”. Challenge accepted, suggests a big well-known bell.

The Undertaker makes his entrance to join the ring and to confront Elias. Elias who initially thinks to leave the ring, not reassured of what can happen to him before turning around and face the Deadman.

He turns his back a second time, pretending to leave again but turns quickly to attack. Error, the Undertaker has scammed the scam and sends him a big boot that puts him down.

A chokeslam, a tombstone, RIP Elias. We move on.

The main event is the match announced and asked by Kofi Kingston at the beginning of the episode. He wanted to face Seth Rollins in a match with both titles in play, inspired by Becky Lynch’s victory the day before at WrestleMania.

Unfortunately for him, after a few minutes of the match and for some reason that we are not able to communicate to you for the simple reason that there probably are not, The Bar attack the new champion of the WWE.

Neither one nor two, the Teddy Long rule applies. Both sides team up to face Sheamus and Cesaro. Nobody expected it and everyone would have liked better, especially for tonight. The public does not like it much and starts to sing a little all its usual repertoire, from “CM Punk” to “boring” via “AEW”, their new title. Joking aside, that’s understandable. It’s a little bland to release The Bar in such a big episode of RAW.

Seth Rollins and Kofi Kingston defeated The Bar with a Trouble in Paradise from Kingston and a Curb-Stomp from Rollins on Cesaro.

It’s hard to know what can make WWE think that in an episode of Monday Night RAW as important as the post-WrestleMania, book a champion versus champion with the titles in play and knock him out with The Bar would be a good idea.

We are used to big events in these episodes, to the launch of a big rivalry for the months to come. There is a rivalry between New Day and The Bar, exciting is not it?