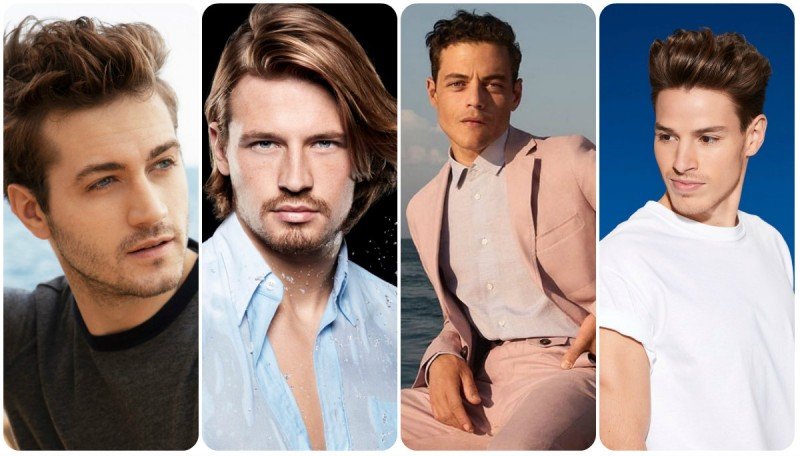 Do you want to change hairstyle before attacking the beautiful season? Here are the latest trends in men’s haircuts for 2019.

The hair would not they tend to shorten in 2019? After several seasons having seen the triumph of the cuts mid-long and (sometimes) very long, the new collections of male hairdresser seem to give pride to cuts (a little) shorter. But beware, gentlemen, no question of shaving so far … though!

That will not have escaped anyone: the 1990s are back! Especially the fashion department, where the sportswear brands “of the time” are back in force and where the ugly sneakers are more than ever rated!

But if the look “nineties” invites itself in our cupboards, it also blows a retro spirit in our hair. Rather than the style of boy bands, you can pay tribute to the late Luke Perry by keeping the wick in the wind, hair on his head.

You do not want to look like a TV series hero? You can always ride the wave 90s by choosing to keep a small bang on the front, or even a cup in the bowl, in a very British style. Yes, we would never have bet on that, yet, this last haircut is in fashion in 2019 – everything is off, my good lady!

Admittedly, it was said in opening this article that the hair became shorter this year. Nevertheless, the mid-length cuts are still very popular with hairdressers.

And here, two styles are opposed: on one side, ultra-smooth hair, which frame the face and can give you a look of skater years … ninety – yes, again! On the other, the slightly wavy hair with a wet effect, to turn you into a beautiful surfer kid – or Aquaman! For this last look, a styling product like Horace’s spray will be perfect!

Soon the end of the undercut?

Ubiquitous or almost on the heads of men in recent years, the undercut tends to fade this season … without disappearing, quite the contrary. Recall that this term refers to the short cut on the sides and the nape, longer on the top.

For men who like short hair, it will rather go to cuts very (very) short, even the skull completely shaved to be in the trend in 2019.

If not, you can also do like Rami Malek . The actor who raised Freddie Mercury at the movies in Bohemian Rhapsody is probably no stranger to the success of the curls this season. Like him, you can choose to keep just a few loops on the top of the head, with more open sides.
In another style, you can let everything grow and keep a natural effect: it has been said a little higher, mid-length hair is still popular. So mid-length cut + wavy hair = cardboard insured!

Your hair, do you want it with or without color?

For some time, we have seen the proliferation of improbable hair looks, with discolourations sometimes very daring. And not only among football stars or US people. Pink, blue, gray, there is something for all tastes and this originality will probably still have its supporters in 2019.

On the opposite, we also see the appearance of the coloring “dark”, very dark. And do not believe that it necessarily gives a Gothic or metal look, it can also be the most beautiful effect if you have the matte complexion. However, be sure to avoid bluish “raven” reflections.

The lookbooks of hairdressing salons

As usual, we will end this overview of new trends in male hairdressing by the lookbooks of the big names in the sector. The opportunity to see that Franck Provost and Intermède gave way to the fashion of the 1990s when Jean-Louis David put on the longer hair in his collection called Splash!

If, despite all this, you are still out of inspiration, you can always take a quick tour on Pinterest or Instagram to find the best haircuts for men in 2019 . The proposals are not lacking, for better or for worse!

How to have a good erection?