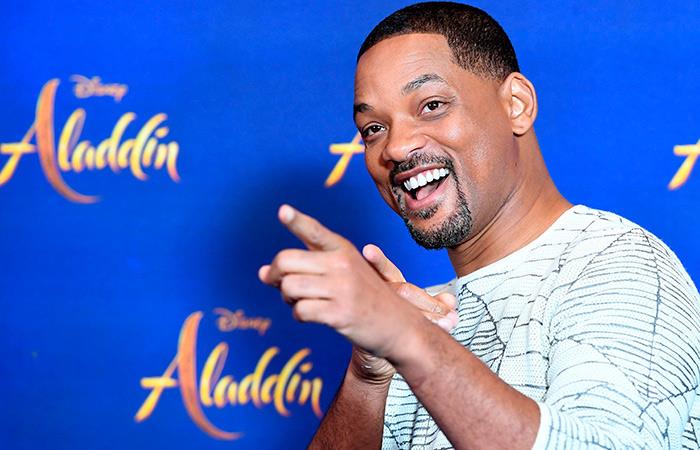 Will Smith, the protagonist of Aladdin, commented that women have the ability to achieve everything they set out to do.

The actor who plays the blue genius of Aladdin, Will Smith, claimed Friday in London the right of women to govern criticizing that “it is ridiculous that a woman can not be a sultana”, in reference to one of the obstacles that Princess Jasmine must face in the film.

Smith made the remarks at the presentation of the new release of the Disney factory in the British capital, where he shared the stage with the director of the musical film, Guy Ritchie; the composer Alan Menken and the interpreters of Aladdin, Mena Massoud, and Jasmine, Naomi Scott.

Between jokes and anecdotes, the so-called Prince of Bel Air (The Fresh Prince) spent a few minutes of his speech to discuss the novelty and “the signature of a generation” that picks up Ritchie’s adaptation as opposed to the original version of 1992 (Ron Clements and John Musker).

“Disney adds a brilliant story of Jasmine that brings a modern touch to the film in which there appears a princess who wants to govern Agrabah and who has to fight from her position to achieve it,” Smith said while mentioning, in particular, the strength of the song “Speechless”.

This track, which means “Without the word” and sung by Jasmine in the film, is consolidated as a symbol of female empowerment when talking about the independence and desire of an intelligent and strong successor who wants to become a sultana.

The claim of the character played by Scott is framed in a “multicultural” Agrabah, in the words of the director, since it is presented as a window to the oriental world in which you can see Arab, Indian or Southeast Asian influences in both colors and in the locker room, as well as in the sounds.

This coexistence between different civilizations was an idea that Massoud also wanted to extrapolate to the reality of the current film industry.

“I think Aladdin represents a movement that has emerged in Hollywood and that shows that any ethnic group can lead a film to the goal,” said the actor.

In the same way, he encouraged “to continue doing more projects in this line” in order to “offer opportunities to all people and continue defending equality and inclusion”.

Beyond the comments of social demand, the artists also shared during the meeting some memories and reflections on their participation in one of the most anticipated Disney films of the year.

According to Smith, when he was offered to play the Genius in this live-action version he was “terrified”. “It’s as if they had asked me to play the role of Al Pacino in ‘El Padrino’ (1972),” he confessed.

What most scared Philadelphia was then the idea of ​​competing with the contribution in the ’90s of the comedian Robin Williams, who stressed that “revolutionized what could be done in an animated film to mark an entire generation when he doubled the Genius “

However, Smith found security in music, more specifically in the song “Friend like me” (A friend like me), which spiced up with some hip-hop rhythms.

“When I arrived at the studio, I was worried about how I could make my mark in the work, so I thought of” Friend like me “ and worked from there to not only try to capture the audience but also to contribute something of my personality. “, He said.

In addition to this Aladdin musical classic, Ritchie’s adaptation includes the famous “One Jump Ahead”, “A whole new world” or “Prince Ali” (Prince Ali), whose sequence is the largest number, with 250 dancers and 200 extras.

Aladdin, Jasmine, the Genie, Jafar (Marwan Kenzari), The Sultan (Navid Negahban), the monkey Abu, the Yago parrot, the magic carpet and the oriental aesthetic will conquer the movie theaters next May 24th.

Mother’s Day: These are the flowers that you can give to your mother, according to her sign