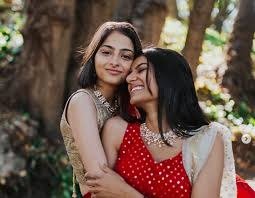 Anjali Chakra and Sundas Malik have recently celebrated their first anniversary. Chakra is a Hindu woman from India and Malik is a Pakistani Muslim artist, together they live in New York and in this beautiful photoshoot by photographer Sarowar Ahmed they confirm the beauty of a love that has gone viral.

In the photos, which are entitled “A love story of New York”, the couple’s colorful traditional costumes contrast with the urban environment of some specific places in Manhattan such as the Ferris wheel of Bryan Park, which becomes witness to this Nice love story.

They are aware that in another part of the world they could not make their feelings visible, so they seek to convey hope to those who cannot live with the same freedom.

“I grew up witnessing and seeing different types of love, some in my family and others in Bollywood,” explains Sundas Malik . “When I got older and realized what my sexuality was, I never saw the representation of people who looked like me. I am very happy to have the opportunity to be that representation with the love of my life. “

It was the photographer himself who shared them on his personal Twitter, causing anger at the message they carry implicitly. It is incredible the revolution that can involve simple photographs, so much, that in this case has even led to political reflection.

“When Anjali and I went viral, our relationship became politicized beyond our imagination,” says Malik. “The Hindu-Muslim, Pakistani-Indian dynamics of our relationship arose in most of the conversations about us. Although the overwhelming response was excellent, we never really thought that the bond we share between us would be a ‘restorative’ barrier between two religions and cultures that have always been in conflict. ”

The proof that they perfectly carry the coexistence of their religions and cultures is on the day that Malik attended his first puja, a Hindu prayer ritual that worships one or more deities. She who grew up in a “predominantly conservative Sunni” home and didn’t have too many Hindu friends was a little nervous, but “Anjali and her parents answered all my questions about the different gods and goddesses and what they represent during the ceremony. Now I’m excited and I want to learn more about Hinduism, while I can’t wait for Anjali to celebrate Eid with me! ”

Eid is the biggest Muslim holiday. A great example that in front of love there are no borders or insurmountable differences of any kind, we are not few who think about it, comments like “that is really love”, “it shows that both love each other deeply”, “they the eyes shine when they look at each other “,” congratulations on their love and do not let anyone separate them “have been able to read among the thousands who have received the publication.

What you must do to improve your sex life, according to science