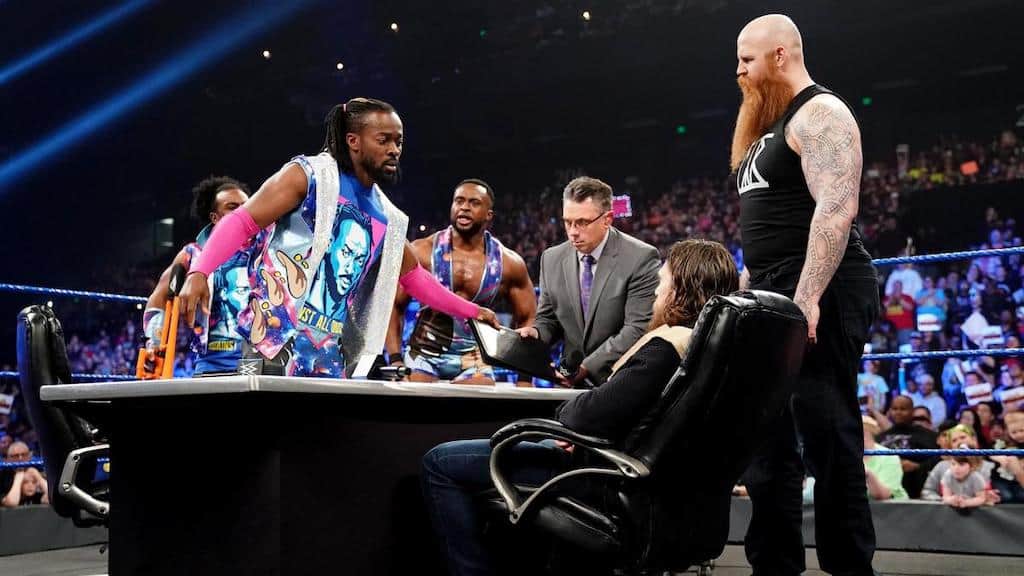 Last week before WrestleMania 35, SmackDown Live swings its go home show including signing the contract for the match between Daniel Bryan and Kofi Kingston for the title of WWE Champion.

AJ STYLES AND RANDY ORTON REMEMBER THE PAST

An episode that kicks off with the Kevin Owens Show including AJ Styles and Randy Orton, who will compete on Sunday, are the guests. The storyline stays in the indie darling classic niche against WWE star Orton explaining to Styles that when he was in the gym for $ 50 in front of dozens of fans, he was at WrestleMania before thousands of people.

The exchange goes up a notch when AJ Styles reminds Orton that his suspensions for taking drugs have punctuated his career. Orton’s answer: accused Styles of replacing John Cena in place of the bitch. No more word, Kevin Owens prefers to leave. AJ Styles and Orton get up and fight. Of course, he said “Bitch”. AJ Styles starts from the third rope for a springboard but Randy Orton catches him in the air for an RKO.

Still a simple segment but for a rivalry like this one does not ask for more. Their specials are good and more.

The Usos, Ricochet and Aleister Black defeated Rusev, Shinsuke Nakamura and The Bar with a Usos double superkick on Rusev.

A surprise appearance by Alexa Bliss after the match, coming to announce to Usos that they will face the three other teams of this previous match at WrestleMania 35 to defend their titles of team champions of SmackDown. A match decided because they declared a deal against New Day last week. Aleister Black and Ricochet have title-shots everywhere. Already that they are catching all the shows, one always wonders in what state we will find them at the end.

The IIconics, the only SmackDown wrestlers in contention for WWE team titles, said they have already beaten the champions and are looking to repeat the feat on Sunday.

THE NEW MIZ HAS ARRIVED

The Miz had to face the three members of the SAnitY clan in a handicap match. The match started well but Shane McMahon came in during this one to add a bit of his personal touch because … well, he can. He announces that the match is now a Falls Count Anywhere. Not enough to scare the Miz, quite the opposite.

The Miz beat SAnitY by falling after sending a flight case crashing on Eric Young backstage at the arena.

It is a version of the Miz that we are not used to seeing: strong, violent and very sure of itself. After a  that worked pretty well, we can not wait to see what will happen on Sunday.

Becky Lynch arrives directly by a car because yes, in real life the police take you to work after your night in custody. She came alone, neither Charlotte Flair nor Ronda Rousey will interrupt her promotion.

A simple promo, most of the work has been done and there is nothing more to add to this storyline. Becky Lynch joins the ring, takes the microphone from the hands of Corey Graves before climbing the table of commentators to be closer to the public.

She returns to the past year, recalling that everything was planned for Charlotte Flair and Ronda Rousey to be the only wrestlers in WrestleMania’s main event and that it was not counting on Becky Lynch who came to shake things up. all that. Sunday, she will become the champion that everyone wants to see: the “double champion”. A good promo that easily reacts to the public. As much to say that if it does not win Sunday, WrestleMania will end in a shower of boos that even Roman Reigns has never known.

EIGHTEEN SUPERSTARS ON A RING

And then the WWE announces a mixed team game at 18. Yes, you read that, eighteen Superstars in the ring. A match that without surprise is especially there for hyper the two royal battles of Sunday’s kickoff, and which will take the form of it, but that certainly replaces the one between Rey Mysterio and Andrade, Mysterio being injured.

The match will not end, ending in a general fight forcing the referee to stop the match. This then becomes a mixed royal battle in which men and women are passed over the third rope.

If one day we would have been told that we would have seen Naomi take out Gallows and Anderson from the ring we would not have believed it, and yet. Asuka will finish last in the ring after releasing Jeff Hardy, who thought he was out of trouble after he released EC3. It was entertaining enough for something that filled up airtime.

Was this a consolation prize for Asuka who lost her SmackDown championship title last Tuesday? We hope at least that she will have a good place in Sunday’s game, even if it does not pay anything.

Samoa Joe beat Ali after knocking him out with his Coquina Clutch.

THE LESSON OF KOFI KINGSTON

Go, more time to lose. Kofi Kingston and Daniel Bryan sign the contract for the WWE title game Sunday at WrestleMania. Kingston arrived as usual with Xavier Woods and an over-excited Big E, while Bryan came with Rowan.

Bryan quickly signs the contract but does not pass it to Kofi Kingston. He speaks as the audience sings for Kingston. He explains (well) that he knows what it feels like to be in the Kingston situation, that he has been in his place in the past and that the public was singing “YES” as he sings today “Kofi” and advise him not to be too complacent with it.

The WWE champion would probably have continued his promo for a while, but Kingston had enough and removed the microphone from his mouth to finally place one. He answers that he is wrong, that he does not know him and that, moreover, he remembers the fact that Bryan became champion in two years when he had to wait eleven years.

He ends by saying that he intends to beat him on Sunday, that it will be for him a way to give him a lesson in life, before signing the contract.

This episode of SmackDown Live ends on a much better note than Monday Night RAW, with an excellent promo from both rivals for the WWE title. We are not necessarily sure of Kingston’s victory on Sunday, but we can not wait to see the match anyway. In the meantime, take some strength to watch WrestleMania, because after this episode there are now fifteen games on the map.