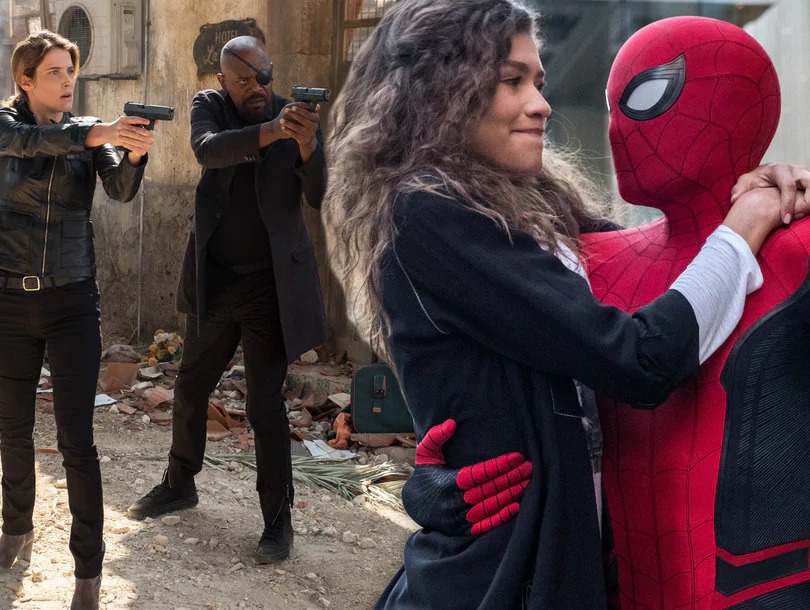 Warning: Spiderman: Far From Home spoilers up ahead! If you haven’t watched the movie, this is your chance to get out now. Spoilers drop in 3. 2. 1…

Spider-Man: Far From Home, the next big Spider-Man film picks up right after the events of Avengers: Endgame. Thanos’ Snap is referred to as the ‘Blip’ in the film and the world is dealing with the odd occurrence in the timeline. The film is set in the present (2019) and it takes Peter Parker’s story arc further. Tom Holland’s Spider-Man is gearing up for new adventures as he goes to new shores where trouble follows him and his friends.

The film does a lot of explaining, dropping hints about what became of the Avengers. But, for the most part, every other hero is unavailable. This gives enough space for Spider-Man to step up and do his job as a serious superhero and lead a film that’s dedicated to him. While we decode all the Easter eggs (there are many!) and scour through information to speculate over the future of Marvel movies, we first have the end credit scenes to attend to. Here’s a lowdown on everything that happened in the mind-boggling post-credit scenes of Spider-Man: Far From Home:

The mid-credit scene takes places in New York’s Madison Square were Peter and MJ land after swinging around the city. Just then an outdoor screen broadcasts pre-recorded footage featuring Quentin Beck, Far From Home’s villain who goes by the name of Mysterio. He twists the story by making the statement that Spider-Man was the one controlling the drones in the fight in London. Just then we are given the most delightful and probably the most consequential scene, the entry of J. Jonas Jameson played by J.K Simmons who is with the DailyBugle.Net (the 2019 version of The Daily Bugle from Sam Raimi’s Spider-Man trilogy). He declares that Mysterio is the greatest hero in history and he also drops the news that Peter Parker is Spider-Man!

We’ve never seen Spider-Man being outed like that in any of the movies. Far From Home establishes the fact that the Multi-verse exists. We have Quentin Beck declare that he’s from Earth 833 while Spider-Man and the rest of his friends live in Earth 616. And it leads to Spider-Man geeking out over the possibility of multiple timezones and physical realities. Now that we have parallel Earths, it means that this world has a version of J. Jonah Jameson who works for a digital news agency and that means Sam Raimi’s Spider-Man cinematic world also exists. What does that mean for the cineverse? We can’t wait to find out as it opens up a whole new world of possibilities.

More importantly, this post-credit scene changes everything about Spider-Man’s arc going into Phase 4. Tom Holland’s Spider-Man might have proved that he belongs in the big leagues of superheroes but with this new stain on his identity, he’s going to have to deal with a lot of trouble. Also, this is the first time this Spider-Man will be grappling with everyone knowing who he is or make efforts to regain his anonymity.

At first, most viewers thought that Quentin Beck aka Mysterio had Nick Fury fooled. But, it’s very unlike Nick to be fooled so easily, isn’t it? The second post-credit scene has a major revelation. Nick Fury wasn’t around for the entirety of the film. The scene has Maria Hill and Nick Fury driving away and transforming back into Skrulls. It’s the Skrulls we met in Captain Marvel, Talos and Soren. Turns out, Fury was on a cool vacation on a spaceship with the Skrull folk while he sent Talos in his stead to do his job. Now, this scene leaves us with a lot of questions.

How long as Fury been chilling with the Skrulls? What missions are they working on? And when did Fury get this laid back? It changes things about the timeline. And every bit of clarity offered by Spider-Man: Far From Home about the post-blip world is taken away as we’re left with more questions than answers.

Looks like Spider-Man: Far From Home did a lot more than just give us a Peter Parker-centric film. The film set up a whole web of events that lays the groundwork for the upcoming Phase 4 of the Marvel Cinematic Universe. The Marvel film released today (July 4, 2019).

3 yoga exercises for professionals, and 3 for beginners