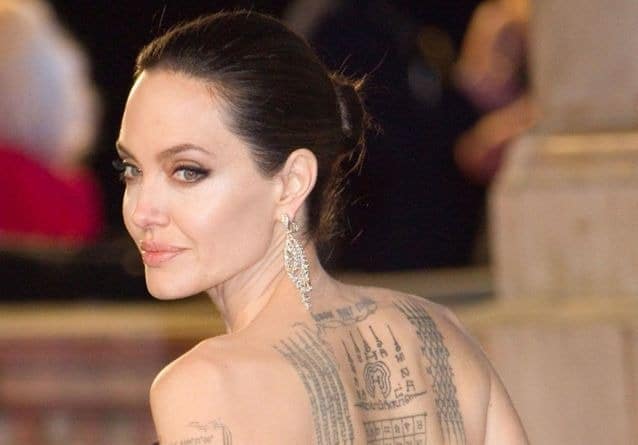 Impossible not to associate Angelina Jolie with tattoos. She is one of the most tattooed Hollywood actresses. On the arms, in the back, on the hands … the tattoos of the beautiful brunette are the subject of much research. Because, when the interpreter of Tomb Raider decides to go under the needle it is never by chance. Winks to her children, philosophical mantras, declarations of love passed under laser after divorce … In short, her tattoos always have a very particular meaning. A fact that very often intrigues the media: “It’s body art. I don’t think it’s abnormal for a person who spends her life in the skin others to want to mark her belonging to her own skin by writing on it things that marked her. She explained to Post-Modern Ink, a magazine specializing in the art of tattooing. For her 44th birthday, let’s take a closer look at the meaning of Angelina Jolie’s tattoos.

On her left arm, Angelina Jolie tattooed a tribal dragon in 1997.

ANGELINA JOLIE AND HER TATTOO FOR BILLY BOB THORNTON

On the occasion of her marriage to actor Billy Bob Thornton, the beautiful brunette has her name tattooed on her left arm. A tattoo removed by laser after her divorce.

ANGELINA JOLIE TATTOO FOR HER CHILDREN

To cover the two previous tattoos, the actress had a series of six geographic coordinates corresponding to the place of birth of each of her children tattooed.

Must Read: Did you know that Hero Fiennes-Tiffin appeared in Harry Potter and the Mystery of the Prince?

In 1996, Angelina Jolie had a black cross tattooed on the left side of the pelvis. The meaning of this tattoo is still unknown today.

ANGELINA JOLIE AND HER TATTOO PROVERB

In 1998, a proverb in Latin came to accompany her black cross: “Quod me nutrit me destroys” which means “What nourishes me destroys me”.

ANGELINA JOLIE AND HER KHMER TATTOO

Tattooed on the left shoulder blade, this tattoo is actually a Buddhist prayer in Khmer for her son Maddox. It says: “Let your enemies flee from you. May the goods you acquire last forever. Your beauty will be that of Apsara. Wherever you go, there will be many who will assist you, serve you and protect you, surrounding you on all sides ”. >>>>>>>>>> ‘Avengers 4: Endgame’: Chris Hemsworth shares a video of Thor crying and singing Johnny Cash

ANGELINA JOLIE AND HER FOREARM TATTOOS

In the 90s, the actress tattooed the number 13. The reasons for this tattoo? Show that she is not superstitious. In 2009, she modified it and added “V MCMXL”, that is May 13, 1940, which corresponds to the date of the inauguration speech of W. Churchill, of which she is a fan.

ANGELINA JOLIE AND HER TATTOO FOR HER BROTHER

In 1997, Angelina Jolie tattooed an H in runic style in tribute to her brother James Haven.

ANGELINA JOLIE AND HER ARM TATTOOS

On the left arm of Angelina Jolie we can read a quote from a play by the writer Tennessee Williams: “A prayer for the wild at heart kept in cages” which means “A prayer for the free in the soul, kept in a cage. “

On her right arm, Angelina Jolie also engraved the word determination in Arabic.

In the back, between the shoulders, the actress tattooed the sentence: “Know Your Rights”. This is the title of a song by The Clash, her favorite band.

In July 2004, when she had just obtained the agreement of Prime Minister Hun Sen to grant herself Cambodian citizenship, Angelina Jolie tattooed a tiger in Bangkok to celebrate the good news. It is produced by artist Sompong Kanphai during a two-hour session using the traditional Thai method, that is, using a manual needle.

ANGELINA JOLIE AND HER BUDDHIST TATTOOS

In 2016, on the set of her film “First, they killed my father”, Angelina Jolie tattooed Buddhist signs symbolizing peace and love.

We discovered the meaning of Angelina Jolie’s tattoo on back