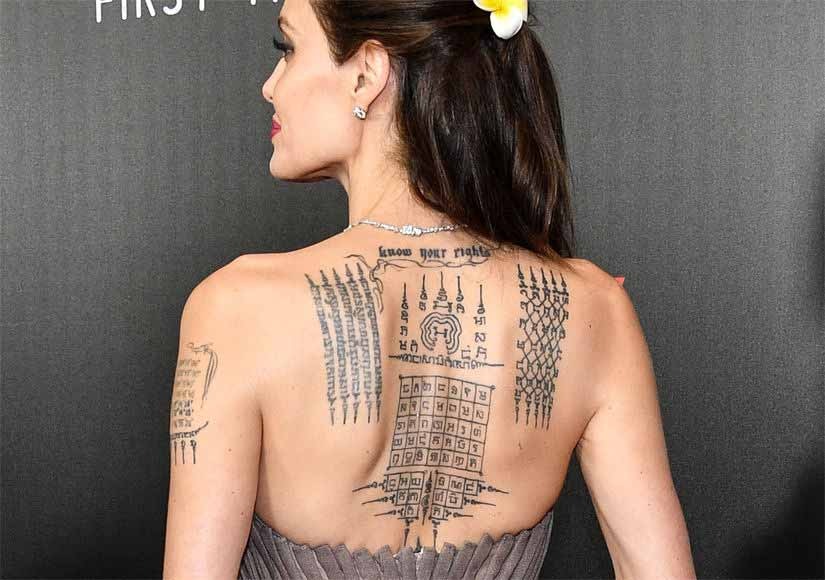 Angelina Jolie’s tattoos – Angelina Jolie is by far one of the most popular tattooed female celebrities, whose tattoos have been the subject of much research, copy and commentary on their meaning from her fans. The daughter of Jon Voight and Marcheline Bertrand regularly gets new tattoos, which makes the press people happy. To date, she has a dozen tattoos on the body.

This sensual, talented and Oscar-winning actress, famous for her roles in the cinema in films like “60 minutes flat”, “Tomb Raider” in which she played Lara Croft, “a stolen life”, “an undefeated heart” or ” The Exchange ”, but also for her marriage to actor Brad Pitt, with whom she forms one of the most glamorous and popular couples in the world of show business.

Angelina Jolie’s tattoos reflect her rebellious personality, her exoticism and her love for those close to her, especially her children, natural and adoptive: Maddox Chivan, Pax Thien, Zahara Marley, Shiloh Nouvel, Knox Léon and Vivienne Marcheline. They have a very strong and very significant significance on affection

Angelina Jolie has helped make her tribal dragon tattoo one of the most popular and reproduced designs in the tattoo community.

The other tattoos of Angelina Jolie :

– The letter M on the palm of the hand, tattooed in tribute to her mother Micheline Bertrand, now deceased. >>>Angelina Jolie: the meanings of her tattoos

– A prayer in Khmer language, for her adopted son Maddox, from Cambodia

– Her tattoo on the left shoulder, which replaces the famous tribal dragon tattoo and the name of her former husband Billy Bob Thorton (which she chose to have laser removed ), consists of a series of 6 geographic coordinates (latitudes and longitudes) corresponding to the places of birth of each child.

– The Roman numeral XIII on the left forearm. This tattoo is found in many people. A tribute to comics?

– A tattoo in gothic letters on the back, between the shoulders: ”  Know Your Rights “. This is the title of a song by The Clash, her favorite band

Her passionate nature had led her to tattoo the name of her ex-husband “Billy Bob” on the arm. This is one of the few tattoos she has had removed from her skin using the laser tattoo removal technique :

– The Chinese character of death (死) which was her first tattoo, is now covered by the Khmer poem

– A window tattooed in the lower back, signifying the confinement and the gaze on the outside. She removed this tattoo because she now considers living in this exterior that she previously only observed.

Must Read: Kylie Jenner now has a net worth of $ 900 MILLION according to Forbes …

Her tribal dragon tattoo on the lower back was partially covered by a large piece: a traditional Asian style tiger tattoo, made in Bangkok in Thailand and tattooed with a wand by tattoo artist Sompong Kanphai. This magnificent tiger tattoo now extends to her buttocks, on each side. The tattoo in the middle of the back, above the tiger, is a cross with tribal wings.

An abstract tattoo composed of line, whose design she had created with Billy Bob, is now covered by the tattoo in Arabic on the right arm

– The Japanese sign symbolizing courage on the right arm: her first husband Johnny Lee Miller wore the same tattoo. She, therefore, had it withdrawn because she considered that it “did not belong to her”. At that time, she also made her tattoo of a black cross on the lower abdomen, close to the energy waves originally produced under her navel.

Must Read: We discovered the meaning of Angelina Jolie’s tattoo on back

If everything seems to have been said about the tattoos stitched or removed on the skin of Angeline Jolie, a question remains unanswered: what will be the first tattoo of Brad Pitt and when will he fall for this passion?

Angelina Jolie gets her tiger tattooed

The Clash Know Your Right Tattoo