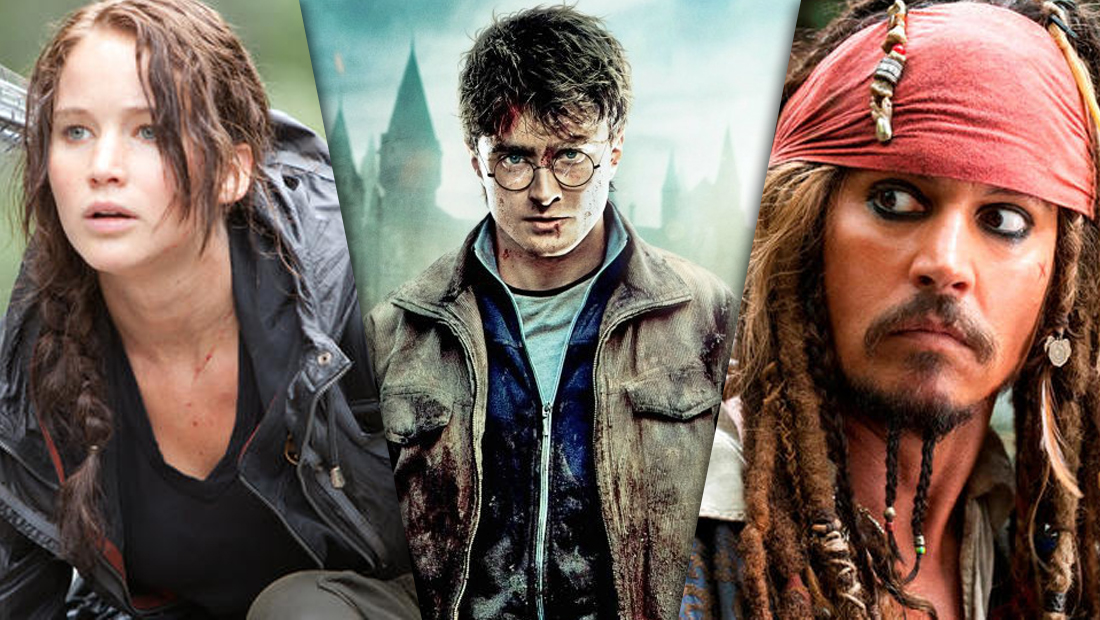 Which ultra-popular licenses will follow in the footsteps of the Lord of the Rings, Star Wars, Watchmen or Disney’s Marvel Cinematic Universe? A short overview of the most awaited for the next decade.

Which ultra-popular licenses will follow in the footsteps of the Lord of the Rings , Star Wars , Watchmen or Disney’s Marvel Cinematic Universe? A short overview of the most awaited for the next decade.

If there is a work that can dethrone Game of Thrones on the altar of the most popular series, it would be the magic of Harry Potter. For the moment, JK Rowling, director David Yates and Warner Bros. Studios. focus on spin-off fantastic animals, but what about the future of the successful franchise after the fifth movie? Very soon, Warner Bros. will launch its own streaming platform and we would be very surprised not to see the company bet on its flagship licenses, as is the case of Disney + with the future Star Wars and Marvel series.

In addition, the rumors of a series Harry Potter by Netflix have already hatched on the Web . It was January 2018, and the rumor swelled following a poster showing a young actor and a release date. The poster has finally turned out to be a fan made but the hype around a show of such a temptation is dreamy.

If the small screen is able to bring dragons back to life, why would not it be capable of a similar feat with dinosaurs? Certainly, the few failed attempts did not really honor the prehistoric creatures (poke Terra Nova and Legends of Tomorrow ), but the work of Michael Crichton is large enough for a serial approach worthy of the name. Again, Universal is busy with Jurassic World , the revival of the saga in the cinema, but given the impressive scores of the franchise at the box office, nothing prevents them to think about expanding the franchise on other formats.

Moreover, the idea does not date from yesterday. In 1993, an animated series project was almost completed ( storyboards are still visible on the Internet) but eventually canceled due to lack of resources, ambitions and to make room for the trilogy co-produced and produced by Steven Spielberg. You will have read it here first: one day, the velociraptors and T-rex will crash their claws on the small screen, project jigsaw or not.

Criticized by some, adulated by others, Edward’s and Bella’s romantic and vampire-like adventures have met with phenomenal success in bookstores and on the big screen. If from a manga, audio books and a million fan fiction have come to perpetuate the popularity of his quadrilogy, Stephenie Meyer seems to have definitely turned the page of his saga of vampires. Yet a spin-off ( The Call of Blood: The Second Life of Bree Tanner ) and a stolen manuscript ( Midnight Sun ), whose writing was stopped by her author, are waiting to find a screenwriter diffuser.

At the moment, there has never been any question of proposing a reboot or other adaptations of Twilight on the small screen. But Stephenie Meyer, Lionsgate and Hulu have been working for some years on an unknown series project, the latest rumors of which had a possible link with Twilight . RAS since, even if the comeback of the vampire series ( Legacies , Midnight, Texas , the spin-off of Penny Dreadful , V-Wars , What We Do in the Shadows …) lately could revive the flame of the writer, who celebrated the tenth anniversary of Fascination on November 20th.

Pirates of the Caribbean

The four seasons of Black Sails have proven that the pirates could successfully launch the boarding of the small screen. This is good, since we are starting to lack pirates in the series. With its new streaming platform, Disney would have the opportunity to give fresh wind to Pirates of the Caribbean , extremely prolific franchise (the five films have returned more than $ 4.5 billion at the global box office) but of which the reputation was tarnished by a blatant lack of creativity in dealing with the story and characters, and accusations of violence against Johnny Depp.

For the moment, a sixth feature film, without Jack Sparrow at first sight, is announced for the 2021 horizon. Why not try to hoist the mainsail in series? With a line-up composed of Star Wars , Marvel and Pirates of the Caribbean , Disney + would put on the table very serious arguments to get ahead in the race for binge-watching. In 2007, at the time of the release of the third installment Till the end of the world , the rumors in Hollywood did not cease to grow concerning a series centered on the youth of Jack Sparrow . Here’s an enticing idea for budding corsairs …

Just like Twilight , the saga Hunger Games has unleashed the crowds that it has indignant. Katniss Everdeen’s fight for freedom, however, has that epic and romantic flavor that makes it an addictive work. If the story written by Suzanne Collins was completed after three novels, the dystopian world of the franchise has the potential to serialize to delight fans mourning badass character played by Jennifer Lawrence.

In recent years, the survival has made a discreet but promising entry on the small screen. Series like 3% , Origin or the best known The 100 try to democratize this genre on the small skylight. A blockbuster with a solid fan base such as Hunger Games could give it a little help and leave out originality. The saga of Suzanne Collins already has a (very small) foot in the universe of the series: Francis Lawrence, the director of the last three opuses in the cinema, board on a dystopian show for Apple . Mocking jays have not finished singing.

The espionage series are far, far from being popular among the series. Homeland is dying in heavy silence, while The Americans has never been granted public recognition despite all its qualities. The best agent of MI6 and one of the most famous heroes of pop culture should be well served to convince the audience to be interested. James Bond, his charming smile and his glasses of Martini would be welcome to bring a real good action on the small screen.

After 24 films (25 if we count the one in production directed by Cary Joji Fukunaga), the franchise needs to be renewed. Daniel Craig is fed up and fans are desperate to regain the level of Skyfall and Casino Royale even cult opus such as Goldfinger , Her Majesty’s Secret Service or Good Kisses of Russia . Not to mention that the small screen is a step ahead of its big brother in terms of representation of minorities and that a 007 black or female agent would have the opportunity to express themselves more in an episodic format.

The future of Hasbro toys in the cinema is compromised. While the spin-off on Bumblebee will come to seize the box office next December, but the Transformers saga is stalled since The Last Knight . The sixth installment was mysteriously erased from the Paramount calendar and the recipe concocted by Michael Bay begins to take water. It may be time to transpose the eternal battle between Optimus Prime and Megatron in a new format.

The question of the budget poses less and less problems on the small screen. The big productions compete for huge investments to match their ambitions (Amazon has put $ 1 billion on the table for The Lord of the Rings , Disney is ready to release several hundred million per season for its series Marvel), which will surpass the spectacular Game of Thrones to intrude into the hearts of fans. Transformers to prove that they are actually able to model themselves in all forms.

It is surprising that Universal has not already thought so much the franchise carried by Vin Diesel brings in millions, that I say, billions of dollars to the company. Each new release of a film Fast and Furious is the assurance of finding in the dark rooms roaring cars and muscular plots that continue to attract the public en masse. The shutters 9 and 10 are already in preparation at the American studio, while the spin-off Hobbs and Shaw will land in 2019. In short, the saga has the potential and fans to take the tangent direction the highway series.

For the moment, the franchise will know the treatment of animated adaptation. Indeed, Netflix is developing Fast and Furious: Spy Racers , alongside DreamWorks Studios and Universal, a prequel dedicated to the youth of Tony Toretto, Dominic’s cousin. A test that could clearly turn into a live action series if the returns are conclusive. The subscriber race is launched and it will be ruthless between streaming platforms.

The blockbusters released in the late 1990s (yes Armageddon and Independence Day , I’m aiming for you) have not done that good in the cinema. But if there is a diptych (now a trilogy in 2008 with the mediocre The Tomb of the Dragon Emperor ) to remember is the remake of The Mummy worn by Brendan Fraser. Often considered to be an awesome nanar (and frankly scary through the eyes of a 12 year old kid), Universal’s monster deserves better treatment than the 2017 movie starring Tom Cruise in the title role.

The shared universe of American studios, certainly still in development, was hampered by a mixed record, both in terms of criticism and recipes, of this feature film supposed to inaugurate the Dark Universe. Conversely, the serial landscape of today is sorely lacking in a series combining humor, adventure and horror (did he really know one?). Brendan Fraser has recovered from his depression and is now turning to the small screen to express his acting talent (he shines in Trust, Condor and Titans in 2018). And then, without kidding, who does not shudder when thinking about the return of beetles scarabs flesh?

Left to live in a world invaded by recycling in series, as much play the card thoroughly. The greatest adventurer of all time is far from conquering the newcomers and reassured the nostalgic with Indiana Jones and The Kingdom of the Crystal Skull , released in 2008. Despite the advanced age of Harrison Ford (76 years old this year) , Steven Spielberg was indeed on a fifth film planned for 2021. Bof. We invite them on the small screen to give a boost to the adventure series and restore the image of the cult franchise.

In truth, Indy has already been entitled to serial treatment. It was the early 1990s and The Adventures of the young Indiana Jones made a monumental flop … What do you want, we do not always fall on the jewel of the Temple cursed.

Michael Jackson: On the Wall, the exhibition tribute to the King of Pop in Paris