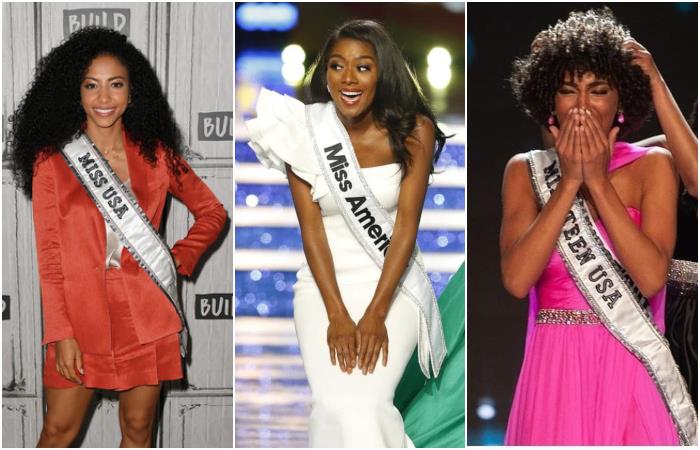 Three African-American women have won the Miss USA, Miss Teen, and Miss America, the most important in the United States.

The United States is one of the countries where discrimination and racism are the order of the day, this does not mean that others are saved. In each place, making a person feel less because of their social condition, status or race is something that has always been the case.

There is never a lack of people who have this need to discriminate when we are all clearly equal in terms of rights, we have to have that clear. The USA is considered a place where there are very beautiful women and they have always known how to represent their country in the different beauty contests that exist.

The most important are Miss USA, Miss Teen, and Miss America because it gives them a vision of a step to the Miss Universe. Tall girls, blondes, green eyes or blue, are the characteristics of what we have seen throughout the reigns, however, that has changed happily.

Since 1920 a law was enacted in these contests that prevented black women from participating, as the years went by, this changed, but the situation continued as before because they supposedly could not be the image of the United States.

However, the struggle to prevent these women from being discriminated against continued until finally, in 1983, Vanessa Williams was the first black woman to win Miss America, followed by Carole Anne Marie Gist, taking Miss’s crown. The USA in 1990 and Janel Bishop, was Miss Teen the following year.

Maybe to you, it may seem a little irrelevant but what we want to make you understand with this note is that the mute is understanding that we are of different races and colors and that is what makes us special.

This young woman is a lawyer by profession, she defends the prisoners so that they can shorten the sentence and pay their years doing jobs that benefit the population. She is a native of North Carolina, however, she finished her studies in South Carolina.

After graduating from university, she took a master’s degree in Business Administration at Wake Forest. Encouraged to participate and has been extending the number of women of color who have won this contest. When she told a judge that she was going to compete, he told her to go out in a skirt because that’s what men like, she replied:

“Do not tell women to wear different clothes while giving men substantial feedback on their legal arguments. ” Do you realize that even what they dictate justice continues with that caveman’s thought of machismo?

This beautiful woman is only 23 years old and already crowned as the new Miss America, she represented New York but her hometown in North Carolina. Besides being a model, she is an opera singer, she realized that this was her vocation because she was born.

Now she works in an NGO, Sing for Hope, where she helps people to reintegrate themselves into society through music. “I grew up in a predominantly Caucasian school, I felt out of place because of the color of my skin, but as I grew up I found my love for the arts, and through music, I could feel positive about myself and who I was.”

She has always been in favor of naturalness and thus avoids having beauty standards. They all came out with their hair trimmed, lacerated, ironed, painted another color, but Kaliegh did not want to hide her afro because she wanted to win for what she really is.

It had many critics but it served as an example for the other girls, first it gained the Miss Connecticut Teen USA and later, Miss Teen USA. “I know how I look with straight hair, with extensions, and with my curly hair, and I feel more secure and comfortable with my natural hair.”

Many people see this color as something bad. There are thousands of stereotypes about the black race, however, they have to understand that they are human just like us. Some go to church, give alms, feed a poor person, but if you discriminate against someone, it’s as if all the good things you did before did not help.

These models, but above all, women, have shown that you can go far without regard to skin color, ethnicity or race. They have left us a very clear message: the world is realizing that we are all worthy and that we are capable of achieving our goals for what we are, and not where we come from.

It is time to change our perception of people. The race does not prevent us from looking great or we can be misses, Cheslie, Nina and Kaliegh are the proof that black girls are synonymous with power.

20 tattoo ideas to be in summer all year long