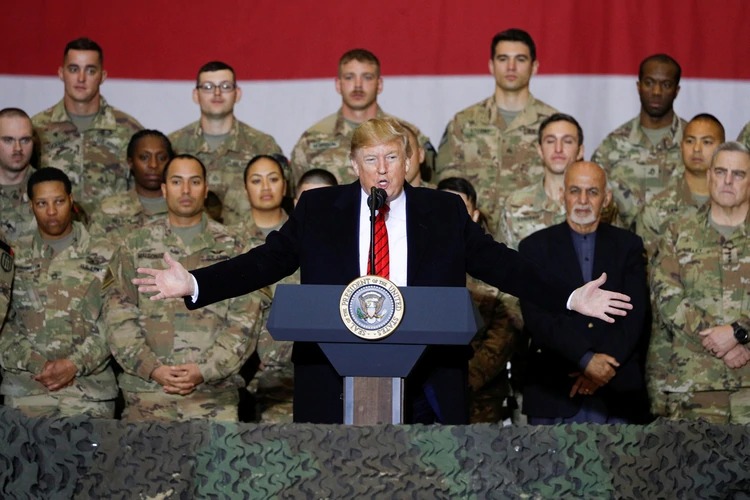 President Donald Trump made a surprise visit to Afghanistan to spend time with American troops on Thanksgiving. The president arrived at the Bagram air base shortly after 8:30 pm local time and spent more than two and a half hours on land. The reporters had strict instructions to keep the trip a secret to ensure their safety.

This visit comes more than two months after Trump abruptly interrupted the peace talks with the Taliban after a bombing in Kabul killed 12 people, including an American soldier. And it comes at a crucial moment in Trump’s presidency, with the political trial process moving rapidly.

This is Trump’s first trip to Afghanistan since he came to power in 2017. “It is a dangerous area and he wants to support the soldiers,” White House spokeswoman Stephanie Grisham told reporters who traveled with the president and they had to keep the secret about the visit until they landed in the Central Asian country.

Once on land, Trump met with Afghan President Ashraf Ghani, who attended his speech to the soldiers at the Bagram military base and announced that the United States has resumed negotiations with the Taliban. “The Taliban want an agreement, we are meeting with them, we are telling them that there has to be a ceasefire,” he said.

Thanksgiving is the most important holiday for the United States, and Trump posed with the soldiers and served turkey, as is traditional.

“We have traveled 8,331 miles to be here tonight, with only one reason: to tell you in person that this Thanksgiving Day is special, that everything is going very well, that our country is stronger economically than it has ever been,” The president declared.

Trump and the first lady made a similar trip last year to Iraq on Christmas night, their first trip to an area of ​​active conflict. Vice President Mike Pence also visited troops in Iraq this week.

With information from AP, AFP and EFE