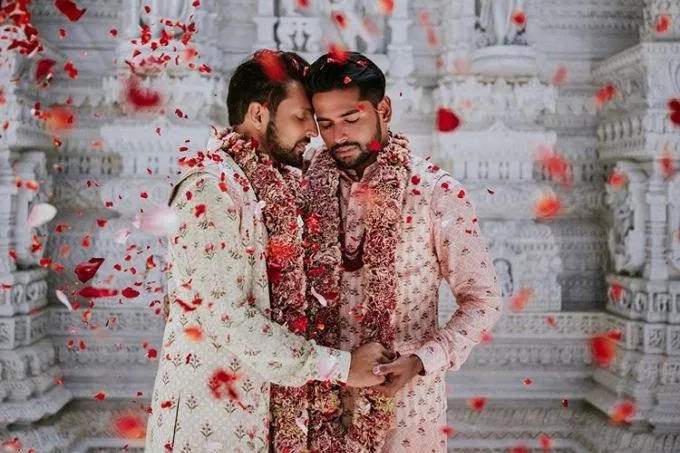 Aditya Madiraju and Amit Shah live in New York but have honored their Indian roots in the wedding celebration.

You might have seen some picture hanging around of a gay couple who got married in a fairy tale ceremony. Who are the two men? Amit Shah and Aditya Madiraju. What made them so popular? We’ll tell you now.

Amit and Aditya are a couple from New York who joined the votes very recently (in July this year). To celebrate the great love they share between them, the two decided to bring the culture of their descendants to the wedding and held a Hindu ceremony with all family members.

It all started in 2016 when the two met through a mutual friend. “We met three years ago at a small West Sidebar for a friend’s birthday. Since that night, we’ve been together, ”Amit told Vogue India.

The choreographer and founder of Aatma Performing Arts, a popular dance company in the United States, still says it was not long before they became fond and found that they had many things in common, despite having different personalities.

he marriage decision came after months of dating, and quickly this big event that marked the life of the lovebirds was beginning to stir the netizens as well.

To begin the marriage work, the couple chose the house that the two built to receive the closest and begin the ceremony. The whole process of the wedding was photographed in stunning images and posted on their Instagram accounts.

With the right to Mehandi (a kind of henna tattoo, usually made on women, which is a tradition in Indian culture during wedding and birth festivities) and distinctive Indian clothing, Amit and Aditya have not thought twice about turning this moment into an exciting one. and only experience.

the fact that the images are beautiful – it was a wedding worthy of Disney history. For the ceremony, Amit and Aditya wore angarkha- style kurtas, typical Indian dress.

Contrary to popular belief, it is not most followers of Hinduism who condemn homo-affective relationships. Generally, various forms of love are accepted within the community. Even in Hindu mythology, some worshiped gods are described as beings who can manifest in various sexes or be androgynous.

It’s moments like this that make our hearts get warmer ❤️

Best Signs that Tell You the Right Way of Life

Gay practices: from myth to reality