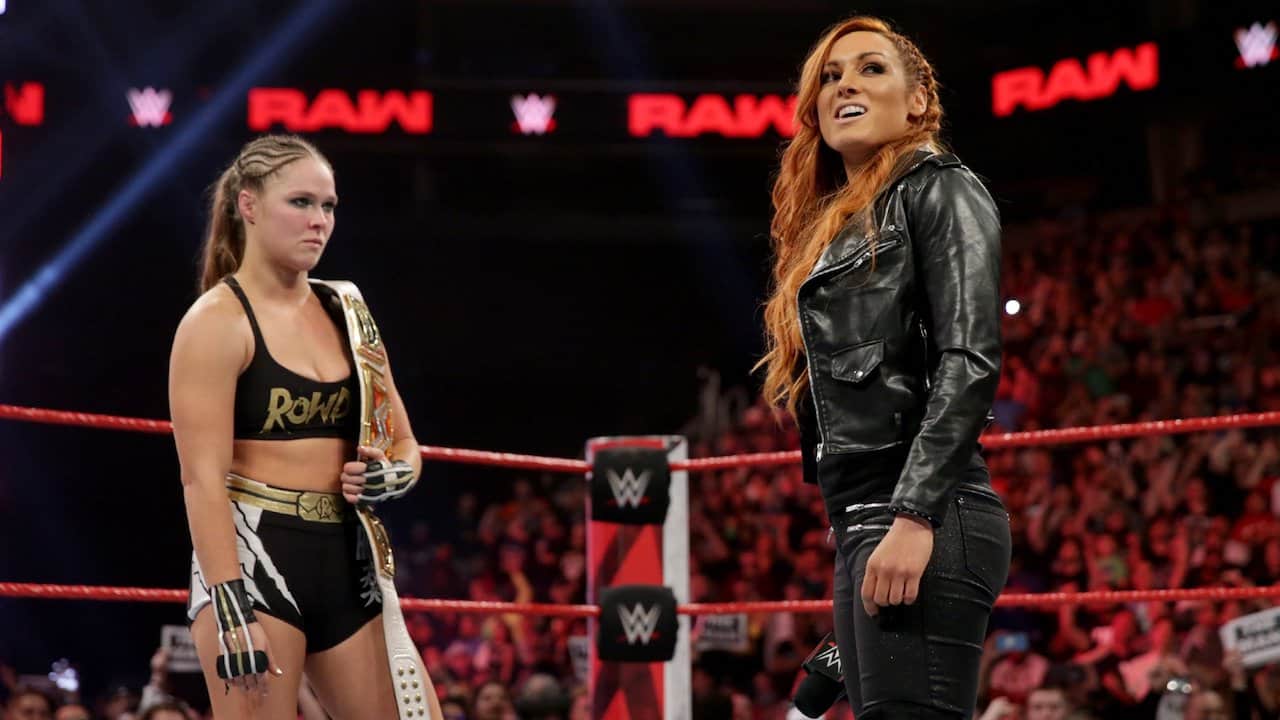 Wrestling and especially the WWE, sometimes because of injuries but also other unforeseen more or less serious, are often subject to last minute changes. WrestleMania 35 has visibly experienced three that have led to the top of the event map. Becky Lynch, Kofi Kingston Seth Rollins were not necessarily in WWE’s starting ideas for his big event.

Several months ago, the Wrestling Observer was already reporting that WWE was planning to send Ronda Rousey into the main event of WrestleMania 35, and only against Charlotte Flair. A poster that at the time seemed logical: the WWE had no choice but to capitalize on the name of Ronda Rousey who brought well could only bring good things to the WWE, while Charlotte Flair was at top of the women’s division.

And then came Becky Lynch with her rage, her Irish accent and her urge to dismantle everything from last year’s Royal Women’s Battle to WrestleMania 34 and a non-existent role to SmackDown, to one of the most important stars of the moment surpassing without worry Ronda Rousey in term of popularity.

It was bad to know the reactions of an audience to which one does not do it anymore. In a rebellious attitude, the public preferred to recognize themselves in front of a Charlotte Flair who seems to offer everything on a set. It’s a classic, turn against authority and you get the support of your peers. WWE, however, insisted for several weeks introducing Becky Lynch as the heel of history before finally accepting the idea that Becky Lynch was popular and that things would work better in this direction.

The injury inflicted by Nia Jax on RAW a few days before Survivor Series last year, offering images that nobody is forgetting about a Lynch blood-stained face and provocative air from the stands, has sealed Lynch’s place on the map. The cancellation of the match against Ronda Rousey has added even more hype about a clash between the two and WrestleMania 35 seemed the most logical moment. The WWE still wanted to keep Charlotte Flair in the story, adding it in a questionable way but not without results.

Kofi Kingston also took advantage of an unforeseen event. KofiMania started quickly when he replaced Mustafa Ali, who suffered a concussion, in the Elimination Chamber for the WWE Championship title and offered a remarkable performance.

The change may be much lighter here. Like Mustafa Ali, Kofi Kingston has the typical profile of the wrestler that can easily be presented in Underdog. In addition to the unequivocal skin color that has been an important part of this story without being explicitly mentioned, Kingston is one of those wrestlers whose talent, devotion and hard work are undeniable. The same goes for Ali, who, if he did not have quite the same career as Kingston, has as much experience as him.

Kofi Kingston is now at WrestleMania 35 with one goal: the WWE title and an audience behind him waiting for one thing, the story ends well.

Seth Rollins vs. Brock Lesnar, no matter the context, is a poster that has its place at WrestleMania, no doubt about it. But Brock Lesnar, once again Universal Champion at Crown Jewel following the forced departure and the abandonment of the title of Roman Reigns to treat his leukemia last October, may not be champion today.

Little is known about the original plans for Roman Reigns at WrestleMania, except that the Wrestling Observer site reported in February that Dean Ambrose was expected to be the opponent of the Universal Champion for this April 7th. If we add the departure of Dean Ambrose announced a few weeks ago, the match had no chance to happen.

The rise of popularity of Seth Rollins arrived in the second half of the year 2018 where it chained to RAW the well repetitive but beautiful performances against Dolph Ziggler or Drew McIntyre during his run as Intercontinental champion, as well as the rivalry against Dean Ambrose. It is possible that it was in these waters that Rollins was chosen to confront Brock Lesnar at WrestleMania 35.

We note that unlike in previous years, the most anticipated posters this year are the results of or less forced or sudden change from the WWE. As to whether has come out pretty well, this is another debate and the assessment will be after WrestleMania when the outcome of these stories will be known. The wait is still very real.