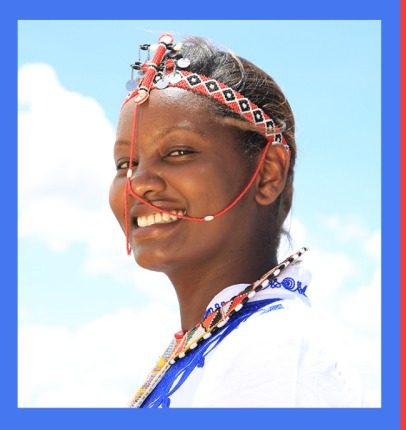 Nice Nailantei Leng’ete was supposed to undergo the Maasai practice of excision – also known as female genital mutilation  (FGM) – during her childhood in Kiana, a Kenyan village. “I escaped by running away,” Leng’ete told Yahoo Lifestyle, adding that she had been hiding under a tree with her sister the first time she ran away from a FGC ceremony . Today, nearly 20 years later, Leng’ete has helped nearly 15,000 girls avoid excision and child marriage, which usually takes place sometime after.

His work has been recognized this year, and his name is now on the  list of the most influential people of Time . She also gave a lecture on her experience as part of a  TEDx talk . Leng’ete had to redouble her efforts to get there, especially in the male-dominated Maasai community, but she fought to incorporate new rites of passage into the community and wanted to end child marriages. and FGM in Africa by 2030.

“FGM is a rite of passage that turns a girl into a Maasai woman. Women are not considered as such without having undergone FGM, “Leng’ete told Yahoo Lifestyle about the centuries-old origins of female circumcision. “FGM in my community means that girls stop studying because of child marriages, and become pregnant during adolescence. Girls are 10 or 12 years old at the time of FGM. They are told that they are now women, so they are ready to marry and have children. It’s a pack “.

Leng’ete understood all this very young, but wanted a different future. “I saw the pain. I saw death. I participated in this type of ceremonies in my community at the age of 7 years. I saw my friends leave school and get married. But, I wanted to continue my education, “she says.

Leng’ete ran away from the ceremony twice. The second time, her grandfather, a respected village elder, asked her why she was so opposed to this ritual. “‘I’m only 8 years old,'” she recalls to the  New York Times . “Wait until I’m 9,” she added. “I was trying to negotiate.”

She ended up announcing to her grandfather that she would prefer to run away forever rather than undergo the operation. He was not ready to lose it and so accepted his decision. Leng’ete was ostracized by the community, despite permission from his grandfather. “Families would not let me play with their daughters anymore,” she told The  New York Times . “Everyone saw me as a bad example; someone who respected neither his family nor the traditions of his community “.

Leng’ete, who was able to grow up without the pressures of marriage, became the first girl in her village to go to high school. Her uniform did not go unnoticed by other women in the village, and her unique clothes helped build a bridge and end her exile. Women and girls in the Maasai community began to view Leng’ete as a source of inspiration and hope, and asked for help to know how to avoid the operation. After becoming a target in the village hiding the girls who were asking for help, she decided to change tactics and enter the negotiations.

Traditionally speaking, women are not allowed to address the village elders, but Leng’ete managed to convince the elders that she had to share what she had learned with the rest of the village following her participation in the village. a workshop on adolescent sexual health organized by  Amref, a health organization in Kenya. Initially, no one attended his meetings, no one listened to his lessons, but little by little, Leng’ete managed to talk to the young men in his community about health, sex and finally FGM. . After four years of discussions, she finally convinced the men in the village that the community would be much more prosperous if women were able to stay in school longer, get married later and not be circumcised. His community also gave him the “Black Walking Stick”. “This is a very special stick that symbolizes the qualities of a leader. He offers you respect and power within the community. It is only available to leaders; you can give orders and direct thanks to him, “says Leng’ete.

In 2014, the former Maasai, heads of more than  1.5 million  Maasai men and women, officially gave up the practice of FGM, thanks to Leng’ete. She became the first woman to address the village elders at the foot of Mount Kilimanjaro.

Leng’ete helped introduce new rites of passage to the Maasai. “They keep the best of the culture and replace only the negative part, that is excision,” she says. “We keep the special ceremonies, the blessings of the elders and all the rest to celebrate the transition from childhood to adulthood. FGM is replaced by education. Girls can now become women in my community without FGM, and they can continue their education instead of getting married and having children at a very young age. “

Today, Leng’ete continues to fight and works with the organization  Amref Health Africa to help young men and women learn more about health and rights regarding sex and reproduction. The law is sometimes difficult to enforce, especially in rural communities, even though Kenya banned female circumcision in 2011, and the Maasai abandoned the practice in 2014. Leng’ete’s fieldwork is essential to getting the law to pass. message about FGM.  “We need to sensitize more political leaders, more elders, more women, more men, more boys, more girls, more excisers,” says Leng’ete. “We need to reach out to more people through community dialogue and mutual aid.”

“It’s my passion that drives me,” says Leng’ete. “I wish to be able to protect these young girls against these dangerous practices; it’s an important job. I am very happy when I see these girls at school. I hope I can educate many more girls, all if possible. “

Fire in California: A lost dog who stood guard in front of the only house still intact in his neighborhood has finally been reunited with his family

14 illustrations of how women have changed in recent times