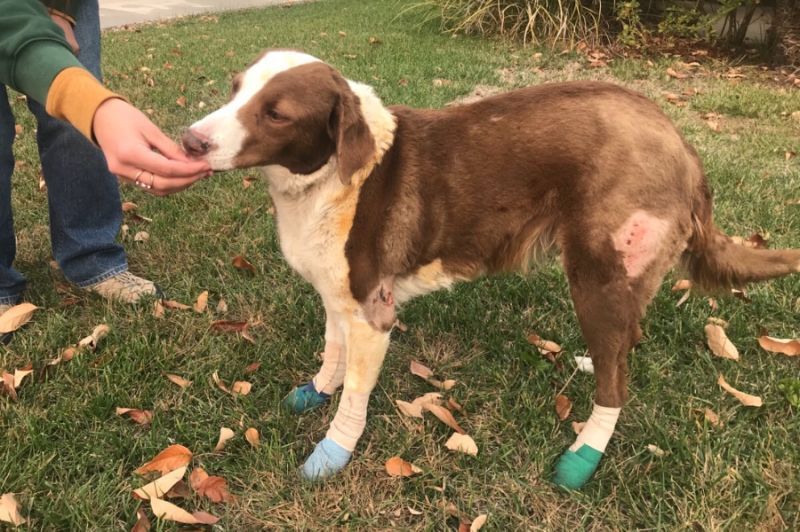 Ella’s owners were unable to take their dogs with them when they evacuated their home in Paradise, California. But Ella decided to monitor the only house still intact in the neighborhood, while the flames continued to grow,  according to Visalia Times-Delta .

The site says that Ellea, a Border Collie, was stuck in the middle of the smoke and debris for almost two days. The family did not know if Ella had survived the flames. But a friend of the family told Ella’s owners, Mike and Leahna Copsey, that he saw her standing guard in front of their neighbor’s house, according to the newspaper.

The Copsey family neighborhood was almost completely destroyed by Camp Fire, the deadly Californian fire that began on November 8th . On Saturday,  there were already 71 deaths , and more than 1,000 people had gone missing.

Ella is currently living with Kayla Westman, the eldest of the Copsey family, according to  Visalia Times-Delta . K. Westman has created a GoFundMe page for people  to donate to help pay for Ella’s medical expenses. For now, she managed to raise $ 175 on $ 650 to help Ella who was burned during the fire.

“Ella is one of many animals affected by Camp Fire. We are very lucky to have him here again after this fire, “says Westman on the GoFundMe page. “Veterinarians’ bills are cheaper for the victims of the fire, but it’s climbing fast anyway. We have already spent $ 250, and any participation will help us for future visits. “

The children in the family are happy to know that their pet is doing well. “She is a very good dog, so I was very happy to hear that she was alive and that she was only suffering from mild burns,” says 8-year-old Clarisa Copsey.

The family also told the newspaper that the Butte Humane Society had provided food and toys for Ella, as well as a small bed and a cage. Ella is safe, but the family has no home. Another  GoFundMe page for the Copsey family  has been published stating that the family “lost everything in the fire”.

On Saturday,  President Trump traveled to Paradise, California.  “For now, we want to take care of people who have been seriously injured,” he told  USA Today . “It’s hard to see. As for the victims, we do not know exactly yet.

Your sex life is not at the top? This is surely stress!