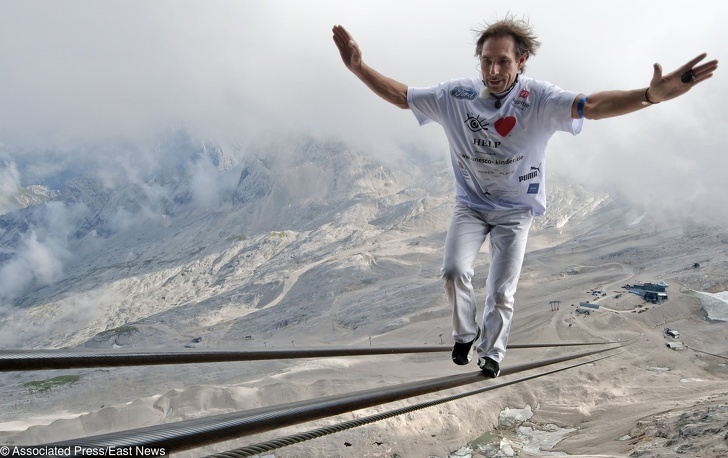 We have all if only once, committed a kind of madness. For some, an act of madness is to be 18 years old, take your luggage and go live in another city. For others, it’s driving a car on a highway at a speed of 260 kilometers per hour. For others, bungee jumping is the craziest thing. But these are children’s games compared to what the characters in this article have dared to do. How can you imagine jumping from an airplane 7.6 kilometers high without a parachute for example?

TheWebFry has prepared a list of the 10 craziest feats we have no chance of imitating. And not because they are not possible, but because of fear.

On October 14, 2012, Austrian parachutist Felix Baumgartner jumped with his parachute from the theoretical limits of space and the Earth’s atmosphere, at a height of 39 kilometers (even if at first it was a height of 36.5 which was planned). After a minute, the adrenaline rider passed the wall of sound, reaching 1,357.6 kilometers an hour and became the first person in the world to reach such a speed without means of transportation.

Baumgartner spent 4 minutes and 20 seconds in free fall and his descent lasted approximately 14 minutes in total.

In fact, the jump record of such a height was maintained until October 25, 2014, and was exceeded then by one of Google’s manager, Alan Eustace, who jumped from a height of 41, 42 kilometers. But this event was not as spectacular, Eustache having used a parachute.

Diving at the bottom of the Mariana Trench

On March 26, 2012, the famous director James Cameron was the first man in the history of mankind to go down alone to the deepest part of the oceans. Cameron spent about three hours at 11 kilometers deep. During his immersion, the director filmed a video and made scientific measurements with the help of a specialized team. He also took several soil samples and captured some creatures from the depths. The film he shot was broadcast in 2013 in theaters and on National Geographic.

It should be known that the first dive at the bottom of the Mariana Trench took place in 1960 and was conducted by a US Navy lieutenant, Don Walsh, accompanied by researcher Jacques Piccard.

The man who surfed the biggest wave in the world

The Brazilian surfer Rodrigo Koxa, in November 2017, conquered the biggest wave in the world with a height of 24.38 meters. This was officially validated by the judges at the Big Wave Awards ceremony, which took place in April 2018, and they added that such a record had now been recorded in the Guinness Book of Records.

The record was set on the coast of the Portuguese city of Nazaré, known for its huge waves, caused by a submarine canyon of the same name.

142 thousand kilometers on foot … without shoes!

A 68-year-old pensioner named Vladimir, from a Russian city, traveled for 22 years on foot all over the world … without shoes! Not so long ago, the man calculated that in recent years he had traveled 142,000 kilometers and visited more than 120 countries. And he walks barefoot because in this way he “feels connected to the earth and it’s good for health”. Vladimir does not use cards or a compass, he sometimes takes buses, spends nights in tents and eats $ 1 a day. And the most important thing is that he travels with the money from his retirement: about 200 USD per month.

He spends almost an hour “dressed” of 637 thousand bees

In 2012, the intrepid Chinese Ruan Liangminge set a world record for using a tunic of bees on his body, whose total weight exceeded 62 kilograms. It is estimated that on his body and around him there was a total of 637 thousand bees. And he managed to hold for about 54 minutes in his holding of dangerous insects, which earned him a world record recorded in the Guinness Book.

In 1985, two American skiers named Cridland and Kirsten Culver set world records in speed skiing on the roof of an ATV. Kirsten slipped to just over 246 kilometers per hour and Cridland slipped to 260 kilometers per hour. At first, skiers used this method to train and learn to control their body against the strong wind during races. But soon after, with the legendary race driver Bonneville, Rick Vesco, they decided to set a new kind of record that nobody has managed to beat.

In 1976, Australian pilot Ken Warby set an all-time record on the water. His speedboat was crossing the surface of a lake at a speed of 511 kilometers per hour. This record has not been passed by anyone until today.

The Swiss athlete and extreme sports enthusiast Freddy Nock, in 2011, for a charity under the authority of UNESCO, has established 7 records in 7 days in the Alps. In particular, he walked on the cable of a cable car that leads to the highest mountain in Germany, called Zugspitze: almost a kilometer without security or pendulum.

Jump without a parachute from a height of 7.6 kilometers

On July 30, 2017, American Luke Aikins jumped from an airplane at an altitude of 7.6 kilometers. After two minutes of freefall, he safely landed on a 30-by-30-yard net, which had been placed on a 20-story building. Aikins became the first person in the world to jump such a height without a parachute, and without outside help, he arrived on the ground completely unscathed.

#cindyjackson Proof of what the RIGHT information can produce. If it worked for me it can work for you. This pic is from my book Cosmetic Surgery & Anti-ageing Secrets, available from my website.

American Cindy Jackson entered the Guinness Book of World Records as the woman with the highest number of cosmetic surgery operations. These include facelifts, liposuction, 2 rhinoplasties, operation of the knees, abdomen, waist, thighs, correction of the chin line, botox injections, permanent makeup, implants on the lips, cheeks and jaw, chemical peel, among others. A total of 52 operations! The woman admitted that all these operations were paid thanks to the immense inheritance that her father bequeathed to her. Cindy is now 61 years old and we must recognize that she is aging rather well.