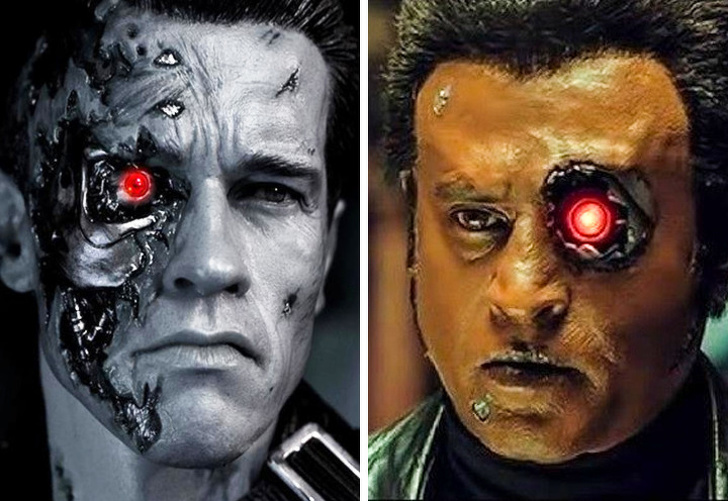 Even if you’ve never had the opportunity to watch Bollywood movies, you’ve probably heard a lot about special effects in India: the dances that start without warning in the most dramatic moments, absurd arguments that at any time, the sound is more surprising than the stage itself, songs that start spontaneously in any scene, actors who overplay a lot and many other things. But everyone has his / her own tastes so Indian cinema thrives, grows, looks for new ideas for upcoming movies and often looks at what’s happening in Hollywood and other industries looking for inspiration ….

At TheWebFry, we found 9 Indian adaptations of films that we “think” know and which are similar, but at the same time very different from the original versions. We can describe them this way: it’s a completely different story …

The scenario of this adaptation is almost the same as the original: an assassination, a girl, a thirst for revenge and love. The only difference, leaving aside their origins, is the large age gap between the two main characters: Mathilda was 12 years old, and in the Indian version, Kiran is 22 years old.

And to return to the Indian version: the story revolves around a cold-blooded assassin who lives alone with his thoughts of revenge and with a young orphan killer to whom he learns the art of killing.

This is an unofficial adaptation of  Terminator , with small parts of the films I, Robot , Matrix and  The Bicentennial Man . Unlike originals, there are two small differences in the film. The first concerns the main character: instead of the exterminating machine represented by Schwarzenegger, we have a robot named Chitti with a small belly and a double chin. The second refers to special effects whose logic and quantity go beyond all imaginable limits (you will not regret it). To conclude, the film looks more like a parody, even if the creators wanted to do something else.

Another adaptation that was not so bad. Nevertheless, we prefer to warn you that during the dialogue scenes between Bruce and God, the characters … sing. At least you can imagine what the world would look like if God was from India.

© The Fate of the Furious / Universal Pictures   © Dhoom: 3 / CounterPunch Studios

It could be a good action movie with the pilots’ story as main plot, adding oriental flavor, electronic music, special effects that go beyond all the laws of physics (the same as in Fast and Furious), a rush of  Ocean’s Eleven, Ghost Rider’s poster  and a story in Chicago.

Snatch: You shine or you raques / Fool & Final

It is not an exaggeration to say that Bollywood has really tackled something sacred. If you’re ready to watch Guy Ritchie’s English humor in Indian style, then you better take this movie as a parody. Maybe that was the goal of the creators.

Difficult to describe the pathetic aspect of this film, as well as the discreet advertising for the Ray Ban glasses. Watch the  trailer , you will not regret it.

Even Quentin Tarantino was surprised by the film, especially because the Indian writers created the story of each person. Too loud, right? Despite this, the film does not live up to the original version. For example, the main feature of  Reservoir Dogs was to tell the flight, without showing the flight itself. In the Indian adaptation, thanks to the first part of the characters, which lasts an hour and a half longer than the original, appears the scene of the flight that turns the film into a real criminal drama. But he is really out of the ordinary: there are dances and songs of bandits, of course.

The United States would suffer a moral decline. However, this adaptation proves the opposite. The famous American story that tells the life of a man dressed as a woman, who tries by all means to get closer to his children by becoming their nanny. The Indian version is slightly vulgar. Nevertheless, many remake moments  seem impactful for such a cute story.

Aabra Ka Daabra is a fun mix of  Harry Potter at the School of Wizards and  Charlie and the Chocolate Factory. Now, you will understand why. This is a magic school to which you can only be admitted if you find a ticket that will allow it in the packaging of cookies Parle-G, which is in fact a real brand of cookies. In addition to the advertising made with the film (it seems that the brand has made a film to promote its products), there are other fun moments. Dumbledore and Snape, for example, are both played by the same person, hence a woman. Ron and Hermione, whose real names are Pinky and Dinky, still answer their first name. On the other hand, there are courses to learn to fly on a magic carpet, etc. All in the Indian style with dances, songs and many other specificities.