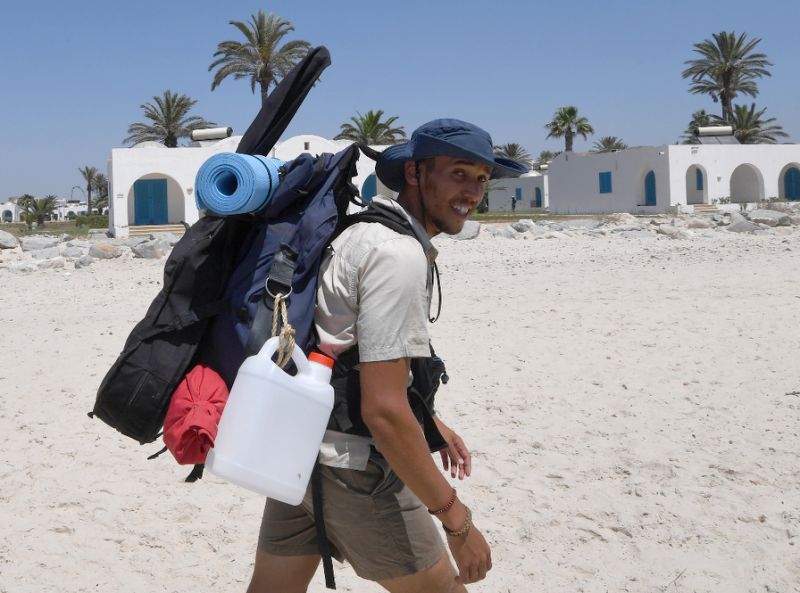 Since July 1, a young Tunisian engineer of 27 years has embarked on an ambitious adventure: walk on foot, about 300 kilometers of the coast of the country, to pick up some of the waste that accumulates there. Its goal: to raise awareness on the problem of pollution of the Mediterranean coast.

” On the abandoned beach, packaging and old paper” … If Brigitte Bardot had interpreted his famous song La Madrague in 2018, it is certainly those words that the artist would have intoned. In question: the increasingly worrying state of beaches bordering the Mediterranean.

Last June, WWF – the World Wide Fund for Nature – published an alarming report on the state of this intercontinental water body: ” the Mediterranean Sea is turning into a dangerous plastic trap, with record levels of pollution that endanger marine species and human health “ . According to estimates, plastic represents 95% of the waste on the beaches and on the surface of the Mediterranean.

The problem is manifested on the coast of many countries bordering the sea, especially on Tunisian beaches, amplified by the political turmoil that the country has experienced in recent years. Since the 2011 revolution, the absence of reliable local leaders, responsible for waste management, has led to their proliferation, both on land and on the coast.

Faced with this sad fact, a man, a 27-year-old citizen, decided to act. His name: Mohamed Oussama Houij. In 2017, this young engineer in sanitary engineering launched an awareness campaign called ” Zabaltouna” , ” You have invaded us with your garbage. “ A citizen action to the original principle: publish on social networks photo-montages featuring characters old paintings mixed with contemporary photographs of the streets of Tunis, littered with rubbish.

After the success of this virtual action, the young Tunisian decided to go further, starting an awareness campaign anchored this time in reality. His idea: to walk 300 kilometers from the Tunisian coast to rid him of some of his waste.

An act more symbolic than really paying, as concedes Mohamed Oussama Houij to AFP: ” The action of 300 kilometers is not really that to clean because I know that I am only a drop of water in But I want to make people aware of this problem, I want them to start thinking: Wait, it’s not normal, all those bottles, all those caps, all those plastic bags!  ”

A journey started since July 1st

His journey began on July 1st. Party of Mahdia, on the east coast of Tunisia, the young militant plans to rally the suburbs of Tunis at the end of August, and to travel no less than thirty beaches. Every day, Mohamed Oussama Houij publishes on the dedicated Facebook page snapshots that illustrate the result of his daily collection, started early in the morning because of the heat wave.

On the first beach cleaned, it is nothing less than a hundred pounds of waste that this defender of the coast managed to collect. By now, the young man has already surveyed more than 150 kilometers of coastline. At mid-term, they are like ” tons of garbage” , which he considers to have picked up, garbage bag after garbage bag. “The more you clean, the more garbage there is, it does not end! It’s amazing!” , he was moved in a statement to AFP.

His record is in layers for baby, become one of its indicators of dirt. ” My record is about thirty on the same beach in Sousse. These are 30 households, 30 families who come to consume space. Leave their trash on the beach does not cause them any problems”, he has entrusted to World Africa. And the places revealing the same sad report succeed each other on the road of the engineer.

” This is not the apocalypse, this is Lake Hammem El Ghzez, this was Hamem Ghzez Lake,” he writes in a publication revealing an expanse emptied of its water but whose sand is strewn with garbage in all kind.

In addition to the presence of waste on the coast, it is above all the indirect consequences of this pernicious pollution on the local fauna which preoccupies the walker: ” I have never seen a living sea turtle, only corpses. years and I live in the Mediterranean, the breeding ground par excellence of turtles! ” he declared. It is indeed no less than thirty inert shells that the young Tunisian discovered during his journey.

” The authorities do not take the problem of pollution in Tunisia properly, there is not really good will!” the activist annoyed. A whistleblower who wants his independence, refusing any political recovery of his action, or any association with any sponsor. Despite the considerable efforts made, reactions to his action “vary from one extreme to another” according to Mohamed Oussama Houij.

“There are people who are very active, who encourage you and help you to clean up. Other people, unfortunately, kill in you all desire to work for this cause,” says the young Tunisian, who intends despite all to complete his journey, against all odds: ” There is no reason for me to stop,” he says before resuming his brave journey along the coast.

The most motivating and inspirational quotes before you get busy