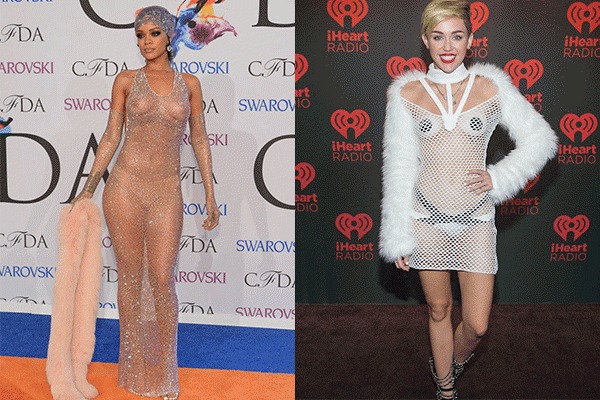 The red carpets are the ideal place for the famous to wear their best outfits; However, there are some who dare to innovate with their daring and sensual clothes. Know them!

The most iconic dresses throughout history have been those that are worn in the most important galas. For example, can anyone ever forget the iconic Dior dress that Jennifer Lawrence wore at the 2013 Oscars? The bearing and the presence of the women who use these models make the transcendence marked in the designs.

On the other hand, there have been dresses that cause a strong impact due to the amount of skin that is left exposed. Many of our favorite celebrities have portrayed very bold outfits to parade through the red carpets, here are some of them.

It will never be a novelty that Riri loves to show her figure, but the dress she wore for the CFDA Fashion Awards has been the most daring that the “work” performer has worn. This model was covered with Swarovski crystals and the fabric was completely translucent.

The MET gala last year had a theme inspired by the transcendence of Chinese culture and how the Western world has interpreted it. To attend the exhibition, JLo used a red dress signed by Versace with transparencies and notable openings on the sides.

Continuing with the 2015 MET gala, Queen B wore a controversial Givenchy dress that left little to the imagination.

To attend the 2015 Vanity Fair Oscar Party, the model opted to use a Versace model in very tight black with many transparencies and openings.

Following the line of the after party of the 2015 Oscars, the singer used a dress designed by Donna Karan Atelier very similar to that of Irina. The detail that marked a difference with the previous one, was that it had a long tail on the back of the model.

During the 2014 American Music Awards, this singer decided to show her curves by wearing a dress too flashy. Definitely, the Lebanese artist stole all the looks of that night by not leaving anything to the imagination with the lookshe wore.

In her presentation during the 2013 iHeartRadio Music Festival, she opted for a white net dress in which she exposed her panties and most of her breasts. The girl of the twerk, as has been the custom, did not skimp on the extravagances of the design she wore.

The former vocalist of The Pussycat Dolls attended the ELLE’s Women in Music Awards of 2012 with a brown dress. The fabric on the top of the outfit was translucent enough to show a little beyond.

She used a dress with dangerous necklines for the Grammy gala in 2001, in which she was awarded an award.

The beautiful Italian-American actress appeared with this interesting model to attend the 1998 MTV awards ceremony.

Would you dare to wear a dress like these?

10 platform heels that will only make you fall for good