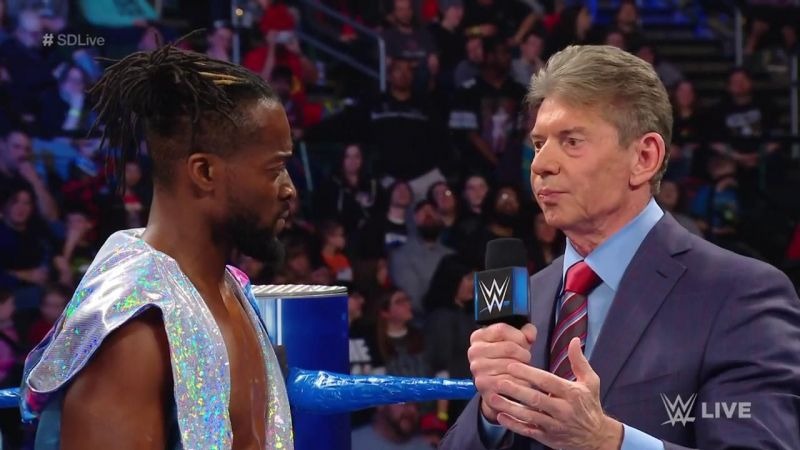 Vince- People are thinking, why Kofi was not given a chance. (Fastlane’s Backstage Moment is running on the big screen, in which Kofi match was spoken but against the bar). Kofi and you guys think I did wrong, but I did not speak for the championship match. Given the match but failed miserably.

The New Day is coming out. New Day is looking very angry. Big E said that he does not want to learn anything because we have always supported, we also went to India, but then you did that. Kofi worked so hard but he could not find anything.

Vins- so anyone deserves nothing I made such a big to WWE but I do not get anything.

New de’re Kofi work over the past 11 years and Kofi has proven to be, like any fans that Kofi should get to the championship match.

Vince- Kofi side you I give championship matches are worth it, but now you’re totally not ready, you’re so good at the Royal Rumble, will be a day you Hall of Famer. If you work alone, then it will be much better. Brian has also praised you.

Kofi – I saw a dream for 11 years but that was going to come true but you snatched it. However, the rest of the dreams have been fulfilled. You have never seen me like how much I deserve. I always worked with full passion for WWE. I want you to tell me what I should do, what I do, because these people trust me.

Vince – (Randy Orton, Samoa Joe, The Bar, Erico Rowan, all these have come out. If you beat them in the next week in the Gauntlett match then you can fight in WrestleMania.

Owens have come while Ali’s entry, on the other hand, Champion Brian and Rowan have come. Eric Rowan has started to hit Owens. Eric looks a lot today, but Owens tagged Ali with him. Ali began flying high fly moves, but Rowan attacked. Brian got the tag. Brian covered with Suplexa but Ali was kick-out. Brian gave the tag to Eric Rowan and Rowan pinned Ali to win the match.

All superstars are present in the ring. Truth and Endrade started the fight and Andrade’s condition is already looking bad. Mysteries have come while Samoa who took the tag and attacked Mysterio .. Now Andrade got the tag and he also attacked Mysterio but slamming mysterious cowherd. Truth has a tag and they shuffle like Cena. Those who have tag near Samoa hit Truth, but Mysterio hit Andrade and Samoa 619, although Mysterio was attacked again, but he pinned Samoa. After the match Samoa, who got angry over the rest of the Superstars

Becky has come out, now he is going to fight in Wrestlemania for which he is very happy, he has thrown his crutches while doing entry.

Becky – Everyone tried to stop me in WrestleMania when I was injured or else the man is back now. I’ll prove to prove why I needed a match at WrestleMania.

Charlotte’s music is ringing. Charlotte congratulated Beckie that she has come to her main event, while she was waiting for her for many years and has done a lot of work for the last 4 years, Charlotte said she would beat Ronda and Beckie. Miss WrestleMania is about to come out. While Becky said that WrestleMania needs a man.

Women’s champion Asuka has been signed and now Sonny Deville is coming along with her Mandy Rose. Asukaa attacked Sonya with tremendous kick. Devil killed Asuka with a spear. Asuka hit the devil very badly. Mandy was also beaten by Asuka, Madi caught Aparan, due to which Sonya fell and Asuka got a kick by putting kick and lock.

Randy – AJ Stiles speaks that this SmackDown is his home but in 2002 he fought for a few bucks I had debuted, after that I made a champion in 2004 and I challenged the Undertaker in WrestleMania. I worked here every year, this is Randi Orton’s house.

Styles- I think that you have seen my career more closely. Well, as if I was proud but I am proud. You can never do what I have achieved. Let’s talk about your career. Got help for the first title. After that, continue to win with help.

Styles- Hearts worked first in Evolution and then teamed with someone and in the end with the Viet Family. If you are thinking that I can become your victim then it is wrong. If you think that this is your home then you make it clear in WrestleMania. (Challenge has been given but Randy has left the ring)

First came the black again, Ricochet and now the legendary Hardy Boys. Now The Bar’s entry followed by Rusev and Nakamura. 8 Superstars are in the ring and Nakamura has started the match against Ricochet. Both of them put their movements, now Ricochet has come and they also put their moves. Shamas and Matt are now in the fight and they give Elbow, Jeff’s tag and both of them together put a leg drop on Shamas.

Cesaro has a tag and he attacked Jeff and tagged Rusev. Ricochet has got the tag and they have vacated the entire ring. This is what Ricoche has been attacked and looks alone. Ricochet has given a tag to Matt, while Jeff is now also targeted by both of the Cesaro in the ring, the shamas were struck by Black, their Rusev, Jeff gave Twister of Fame to Cesareo, then Swann hit Tom Bomb, but at the time of Pin Come on, all the fight is taking place, but these new days have also come. The match has been canceled. At first, Shamas hit Steel Steps on Seychelion on barricades. Nakamura hit now kicks off Rusev

Shane is coming and now he has become a heel in WWE. All of them have become fan witnesses in the fast lane they did with Miz. The world is kept in the ring, which he won. Shane is all abusing. While Shane has called Announcer and asked to praise him, he is not doing it properly.

Shane- Why do all people have to know why I attacked my partner? I was paired with everything and I asked myself what I can do for myself. Then I thought and what I can do for you, so I hit Miz. I liked what I did in Fastlane. I want to tell Midge that in WrestleMania I am going to make this condition.

Hello, Welcome to SmackDown’s Live Commentary.  There was a lot of action in Fastlane , which had a lot of action, but it is not necessary for everyone to have an action. On one side, where  SmackDown  ‘s Tag Team Titles match was the first match of the show, one thing was certain that we would get to see something very awesome and it happened because because of this first match of the show, we got  Shane McMahan – Miz But he saw that he did not just shoot at Miz but his father too.

Because of this, the advent of the show came in, but the  story between Sonya Devil and Mandy Rose was further enhanced  by the fact that Mandy did not want to know about gold, even though Mandi did not want to know what caused the mistake and because of which she had trouble in the match. .  The story of Daniel Brian is also going well among all  of them, and now in SmackDown tomorrow, we will get answers to many questions.