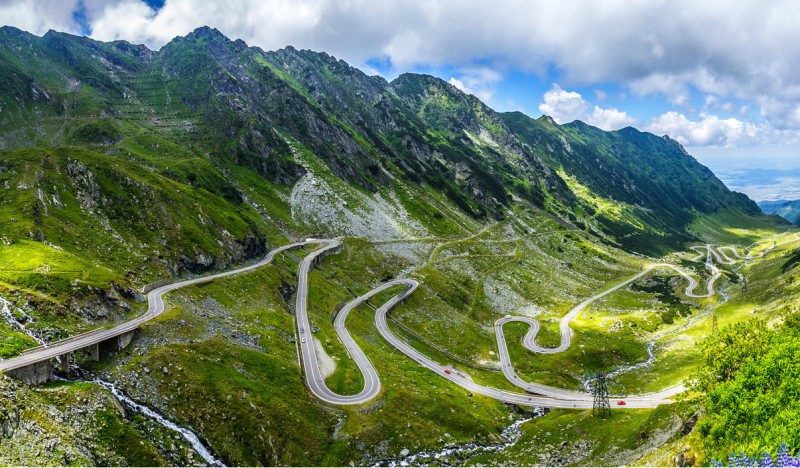 The most beautiful road in the world may not be the one you believe. In Romania, Transfagarasan offers extraordinary landscapes.

The evocation of the most beautiful roads in the world often gives rise to a trip to the United States. Whether on Route 66 or US Highway 1.

Closer to us, the Transfagarasan is also a mythical route, and even one of the most beautiful in the world, crossing the Carpathian Mountains in Romania . Laces, sumptuous landscapes, bridges, viaducts, tunnels, passes are part of the characteristics of this unknown road to discover absolutely.

Transfagarasan was built under the Ceaucescu regime in the 1970s to allow rapid military intervention in the event of invasion by the USSR.

Half a century later, it has become a major tourist destination of Romania. It required more than 6,000 tons of dynamite to open a path on the northern side of the mountains and cross the highest mountain range in the country, the Carpathians.

The laces and wonderful landscapes of the Transfagarasan

It travels 150 kilometers of laces with a speed limited to 40 km / h and rises to 2000 meters of altitude. The landscape is impressive, especially at the pass where the road winds on a plateau between two slopes of the mountain.

At 2040 m altitude, at the highest point of the road, there is Lake Balea , a glacial lake located between two of the main peaks of the Fagaras mountains; the view of the Carpathians is sublime. It is also where we find the longest (about 880 meters) and the highest tunnel of Romania.

Many sites to discover along the way

On the Transfagarasan, we stop to admire the church of St. Nicholas, the monastery of Curtea d’Arges, the castle of Fagaras …

From north to south of the Carpathians (or vice versa), the natural landscapes are all sumptuous. One can make a stop in the Retezat National Park which has more than 60 peaks of 2,300 m or more. Glacial lakes are also very numerous, as are endemic plant species and wild animals such as wolves, bears, lynx …

If a road trip in Romania tempts you, pay attention! Transfagarasan is often closed from October to June. It is very narrow and caution is required, especially on Sundays, where traffic can be heavy.

How to prevent kidney stones

These 10 places are just incredible

Where do Europeans make love on vacation?