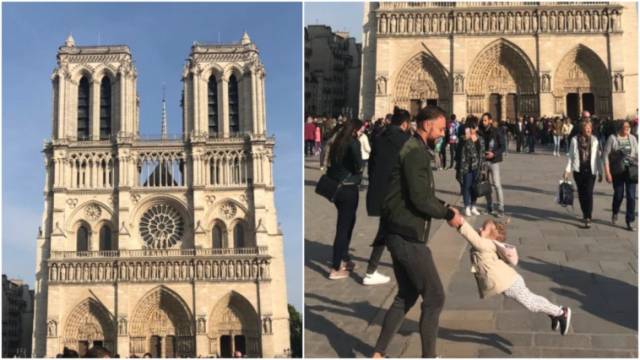 An American tourist took a snapshot of the cathedral just before the fire. She then managed to find the man and the child playing in the foreground of the image.

“The hunt is over! Brooke Windsor was delighted Thursday afternoon on Twitter, saying she managed to find the man and his daughter who was playing in front of Notre-Dame de Paris moments before the fire that devastated the cathedral on Monday night.

This 23-year-old American tourist took a picture of the cathedral facade under a beautiful blue sky at precisely 17:57, less than an hour before the fire started. She found out just after the fact that a father and a girl appeared in the foreground of his picture.

Immediately, she posted the cliché on Twitter, accompanied by the following message: “I almost went to see the father and ask him if he wanted the photo. Now, I regret not having done it. Twitter, if you’re magic, help him find it! “.

“Thanks again for this beautiful picture”

The young American woman from Michigan also says she took the picture when she left Notre Dame, and while she was going to the Louvre.

His call was finally heard on Thursday. The father showed up but chose to remain “anonymous,” Brooke Windsor told Brooke on Twitter.

“He wrote me Thanks again for this beautiful photo, we will find a special place for her. Thank you to all those who shared the image and for your kind words, “she said, thanking all those who had relayed her call.

The search is over! The photo has reached the dad & amp; family. He has chosen to remain anonymous in the wake of tragedy and writes: “Thanks again for that beautiful photo, we will find a special place for you.”- Brooke Windsor (@brookeawindsor)

She who visited the capital with a friend had also told the BCC to have the day of the fire “attended the shock and sorrow with the rest of Paris”.

There are two types of girls in the world, and here are 18 photos that prove it!