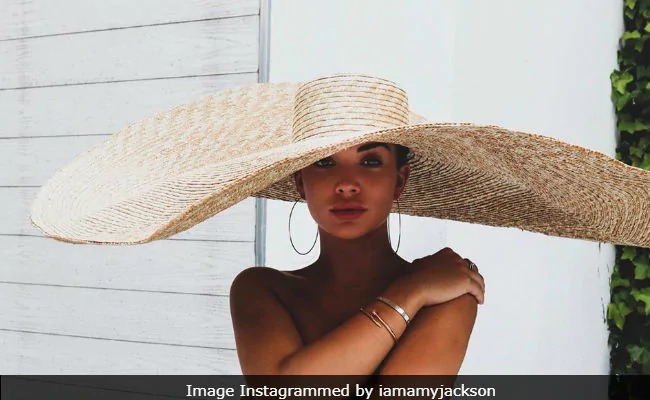 Amy Jackson got engaged with her boyfriend only two months ago, the youngest guest is also coming to her house soon.

Actress Amy Jackson is going to be a mother soon. Every day Amy keeps saying through social media that she is enjoying every stage of her pregnancy. A few hours ago, the actress shared her health updates with fans through a new picture on her Instagram account.

Amy Jackson has described how her body has changed in the 33rd week of pregnancy. Amy Topless is seen standing in this picture that surfaced. Amy is flaunting her baby bump very beautifully through this beautiful picture. The big hat Amy is wearing in this picture will definitely grab your attention because it has caused four moons in this picture.

Sharing this picture, Amy wrote in the caption that Greece …? No, I and my child have spent the entire summer behind the garden … I am waiting for his little appearance. I am now in the 33rd week of my pregnancy. During this time, my bump, stretch mark, weight gate were all seen. Amy has shared this caption with #Motherhood.

Check out the latest photo shared by Amy Jackson below…

By reading this caption, you must have understood how excited Amy is for her first child. Earlier, some more pictures of Amy became increasingly viral, in which she was flaunting her baby bump in a beautiful black dress. Amy was wearing a black hat in this picture.

See these pictures of Amy below …

Amy had engaged with her boyfriend George Panayiotou in London just two months earlier. Not only this, Amy and her boyfriend also got a photoshoot done for a well-known magazine. By the way, how did you like the latest picture of Amy? Do not forget to mention in the comment box.

7 body parts to remember when you put sunscreen

Who are the most stylish footballers of the Team of France?