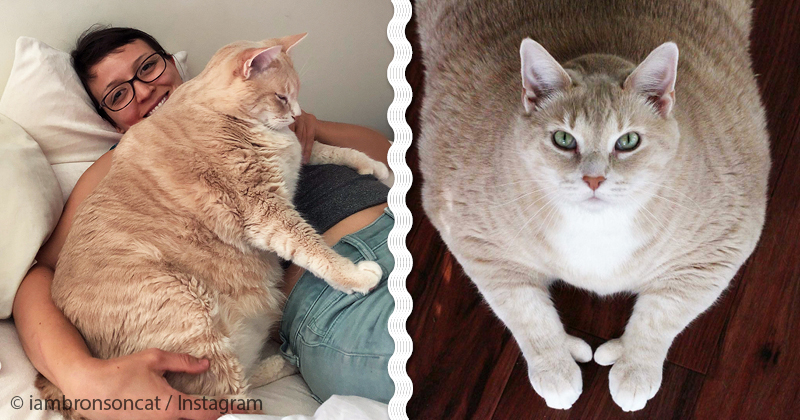 We are not the only ones who sometimes have the chance to be in the right place at the right time, animals too.

One day, Mike Wilson and Megan Hanneman decided to adopt an animal in a shelter. Perhaps they would have preferred a nice little kitten, but their attention was attracted by a 3-year-old weighed nearly 15 kilos.

When we entered, we were instantly attracted by this nice giant named Bronson. The person who greeted us told us that to get a closer look, we first had to sit down and be interviewed by a staff member.

The couple was only able to meet Bronson the next day. Megan and Wilson decided that it would be great to adopt the animal and help him lose those extra pounds.

We went to meet him and we immediately fell in love with him. I remember that my cheeks ached because of my smile.

Bronson was so sweet and affectionate that the couple wanted to take him home immediately. It should be noted that being overweight is not the only distinguishing feature of this animal. He also has extra toes, so his front legs look like human hands.

Today, Mike and Megan help Bronson get rid of his extra pounds. They have changed his diet and keep him active by having him play games and exercise.

For example, in this video, Bronson climbs the stairs for the first time.

The nice cat and his owners are determined and the results are already impressive. Currently, the cat weighs about 12.50 pounds and this is just the beginning!

In order for him to fully enjoy his life, we want Bronson to lose all of his weight, as fast as possible!